A year after the first lockdown, in light of the second, deadlier Covid-19 wave, we talk to residents of Dharavi to understand how it is impacting them.

Last year during the first wave of the Covid-19 outbreak, the urbz team researched and documented the impact of the pandemic and the nationwide lockdown on the residents of Dharavi. We found that people faced a shortage of food, transportation was a key problem, many people were stranded, unable to return to their homes in the villages, and several industries were gravely impacted economically. A year on, when industries and businesses had only just reopened, and people were starting to venture out, the possibility of yet another lockdown threatens their newly, and slowly reestablishing fragile stability. In light of the second, deadlier wave, we reached out to our networks in Dharavi to understand the situation on the ground from them.

With the rising number of Covid-19 cases in Mumbai and the new restrictions to prevent it, Dharavi has been impacted by the crisis in the same, if not worse, way as the rest of the city. Businesses have once again been forced to close, demand in all sectors has reduced, driving manufacturing down, and people have been advised to stay indoors. From our learnings last year, in a high-density, manufacturing neighbourhood such as Dharavi this means that most people are out of work and they may soon be out of money.

Gulzar Waqar Khan resides on Bareilly Street and is a garment manufacturer, a community leader, and the head of the ‘Hum Sab Ek Hai’ movement. Last year, he worked extensively in his neighbourhood to provide food and basic necessities to families and individuals in need. He told us that the situation was dire. People were once again out of work and would soon be unable to afford basic necessities. All shops on the 90 feet road had been shut since 16 April 2021. Garment manufacturers who had just restarted their businesses were seeing a steep decline in the number of orders since early April. Looking at the state of the industry, whilst also still reeling from the trauma of the crisis last year, many migrant workers, who make up a large share in the garment manufacturing industry, have returned to their homes back in their villages. Gulzar said that the one benefit of the nationwide travel being permitted is that many people who faced anguish in face of the pandemic last year, would be able to avoid it. We also found out that, taking undue advantage of the situation, some people have inflated prices of everyday items such as sugar, grains, etc. Gulzar ended the telephonic interview with a plea for donation, where he requested anyone willing to help to reach out and make in-kind contributions in form of food, essential items, etc.

In the New Transit Camp, the situation seems more intense. The curfew is being implemented more firmly. Paul and Ayub, both residents and social workers in this area told us that the locality is under complete lockdown. Not many people are leaving their houses except for grocery shopping and other essentials services. Most businesses have shut down or are barely operational. Street vendors have also been asked to shut shop. However, people that work as house help in the nearby affluent areas are continuing to work so far. Both, Paul and Ayub, individually noted that people have supplies only for the fortnight and that many may run out of savings. Not many people are willing to help. No one has reached out like they did last year. The state-promised rations of 3kg wheat and 2kg rice have not yet arrived. Ayub also mentioned that some people were in fact inflating prices to profit off of the looming food crisis.

Vidya Mane, who works in a school and is a social worker, lives in Laxmi Nagar near Sion station said that schools were closed and would not reopen before June. At present, she was working from home. She noted that although the situation was not yet as bad as the previous year, it was rapidly heading in that direction. While the availability of food was not a problem, its affordability was.

Shyam, a Dharavi resident who lives near Ganesh Vidya Mandir - and a fellow member of the urbz team - told us that the police are constantly on awareness drives across the neighbourhood. There are continuous announcements through radio cars on hygiene and covid-19 prevention. People are being advised on the reuse of masks, social distancing, and sanitation. He also noted that the enforcement officers are not as brutal towards the general public as they were last year. We were told that some restaurants were open and were offering takeaway/parcel services to their customers.

However, in the inner parts of the neighbourhood, the situation is contrasted. Many streets are ever-vibrant as before. Some lanes are still bustling, with buyer-seller interactions proceeding as usual. Although their shops are partly shut, shopkeepers carry out their day-to-day business through quick transactions outside their shops. Sanju told us that people have to make ends meet.

Irfan who runs a recycling workshop in Dharavi’s 13th compound informed us that the recycling sector in Dharavi is in a slump. The workers in his workshop are planning to leave for their villages soon and he will be left with no alternative but to temporarily halt operations in his workshop. Irfan also noted that the main road abutting his workshop was at a standstill and that people were only venturing out for necessities.

In Kumbharwada, the potter’s colony, very few kilns are still burning. Potters are finishing up their yearly orders due for the festival season later in the year. Abbas, a potter, and an entrepreneur told us that he received the cancellation of three large orders owing to the uncertainty of the situation. The business has slowed down and potters in his workshop are now running out of work.

A building contractor we work closely with in Dharavi Koliwada, Joseph Koli, confirmed that the construction industry which relies heavily on migrant workers has also been impacted. Afraid of another lockdown, most of his construction team has retreated to their villages in Northern India. Joseph estimates that they will return after the situation is under control. Despite construction activities being allowed under the state Covid-19 regulation, shops that sell materials required are shut. Contractors are now stocking up on required supplies whenever possible or using their reserve to finish the jobs at hand. Soon they will also have to cease their work. Joseph, who is also a community leader in the Koliwada, observed that the streets of Koliwada had quietened and that people were avoiding stepping out of their homes.

Rohit, a community leader in Kala Killa has been spending his non-working hours urging the elderly in his vicinity to get vaccinated. Along with his team, he has taken over hundred senior citizens to vaccination centers. Rohit, who is due to get married in the following week, had been renovating his house when the new restrictions were announced. Most construction workers have left the city since and Rohit has been running around trying to finish the remaining civil work in his house.

We also spoke to a social worker Arun Kunchikor, who has been providing water to the migrants departing from the city over the past few weeks. The sudden exodus of people has created a high demand for train tickets, leaving many people stranded outside train stations. Arun told us that some people have been exploiting the situation and selling train tickets to desperate migrant families at marked-up prices. Those who can afford, are buying them, the ones that can’t are stranded with very limited food or water. He also mentioned that to buy these tickets, many end up spending all their savings, leaving themselves with nothing to buy food or water. With help from a non-profit organization- Akshaya Patra Foundation and some volunteers, Arun has been able to distribute over twenty thousand bottles of packaged drinking water to the migrants at the Lokmanya Tilak Terminus in Kurla and the Chhatrapati Shivaji Maharaj Terminus. Arun, whose regular work is centered around helping and rehabilitating homeless drug abusers, noted a spike in the number of drug abuse cases since the closure of alcohol shops as per the new restrictions. He also mentioned the collapsing state of the healthcare system, where there are no beds available in any wards of a nearby government hospital. There is an ambulance shortage and most cab drivers are unwilling to transport patients. Arun speculates that in another fifteen days people will run out of money and food. Most rents, deposits, and bills will be due by the end of the month and people will once again be left hungry. Ardent to help out in any way he can, Arun made a plea for in-kind/monetary donation for sanitising equipment, sanitizers, and ambulance services, offering to transport patients to healthcare services himself.

Social activist, long-time urbz advisor, and a Dharavi resident, Bhau Korde has been monitoring the situation on the ground closely. Last year, he actively participated in mitigating the food emergency in Dharavi. Through his networks, he connected many donors with organizations that were delivering grains and other necessities. When we asked him what he thought of the current situation, he told us that although it is not at its worst at the moment, it could easily and rapidly deteriorate. He recommended that we remain vigilant of any changes that might occur in the following weeks.

The urbz team is actively observing the situation in Dharavi and we will keep you posted on any developments. In the meanwhile, here are some organizations and individuals that are tirelessly working to ensure no one goes hungry. We urge you to reach out directly and help them if you can. 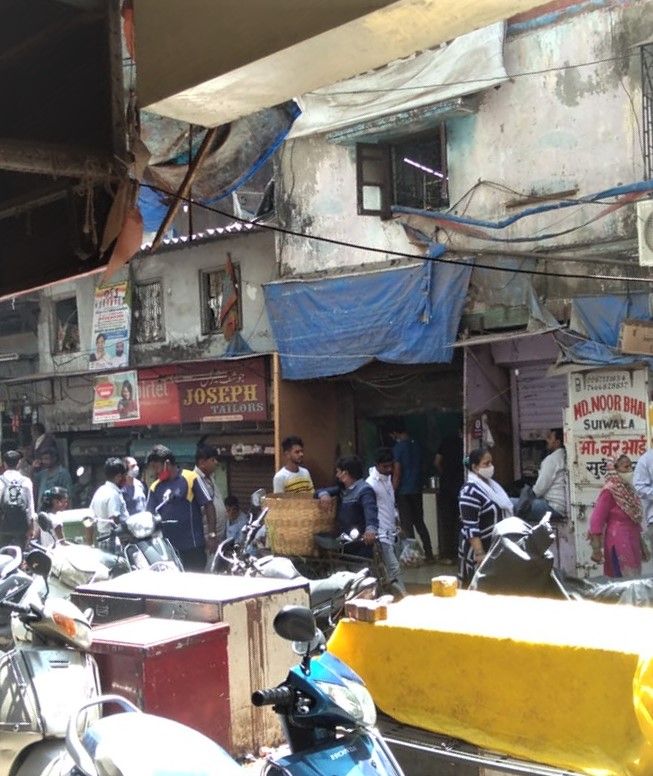 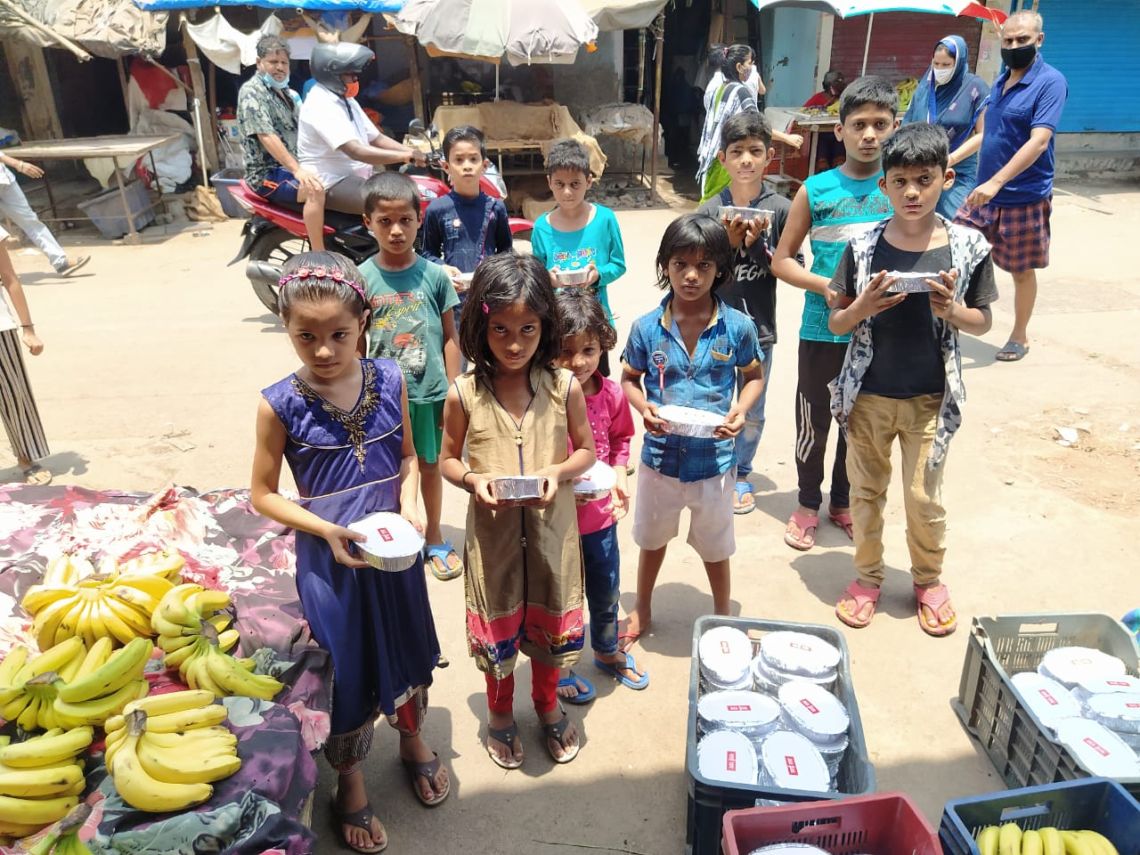 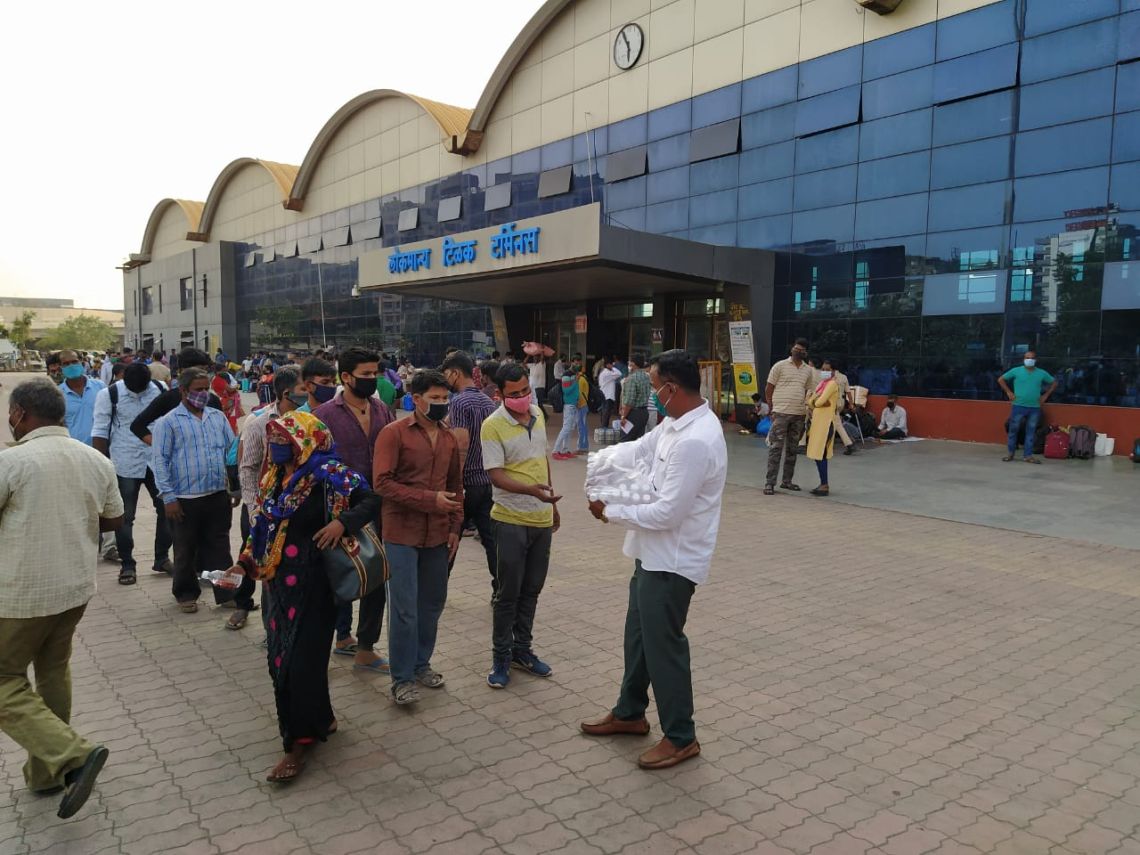 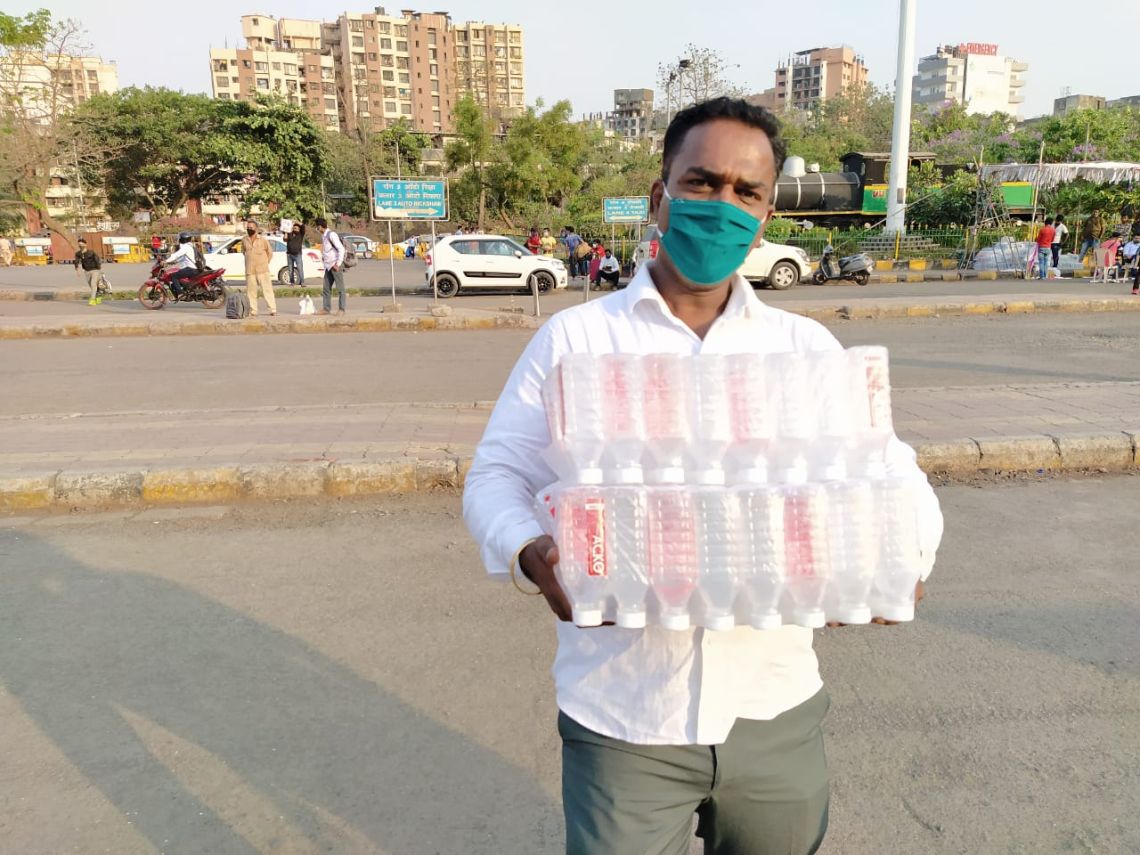 We documented the food relief distribution network in Dharavi last year. You can find it here.

You can also check out our entire coverage on the Covid-19 situation in Dharavi in 2020.