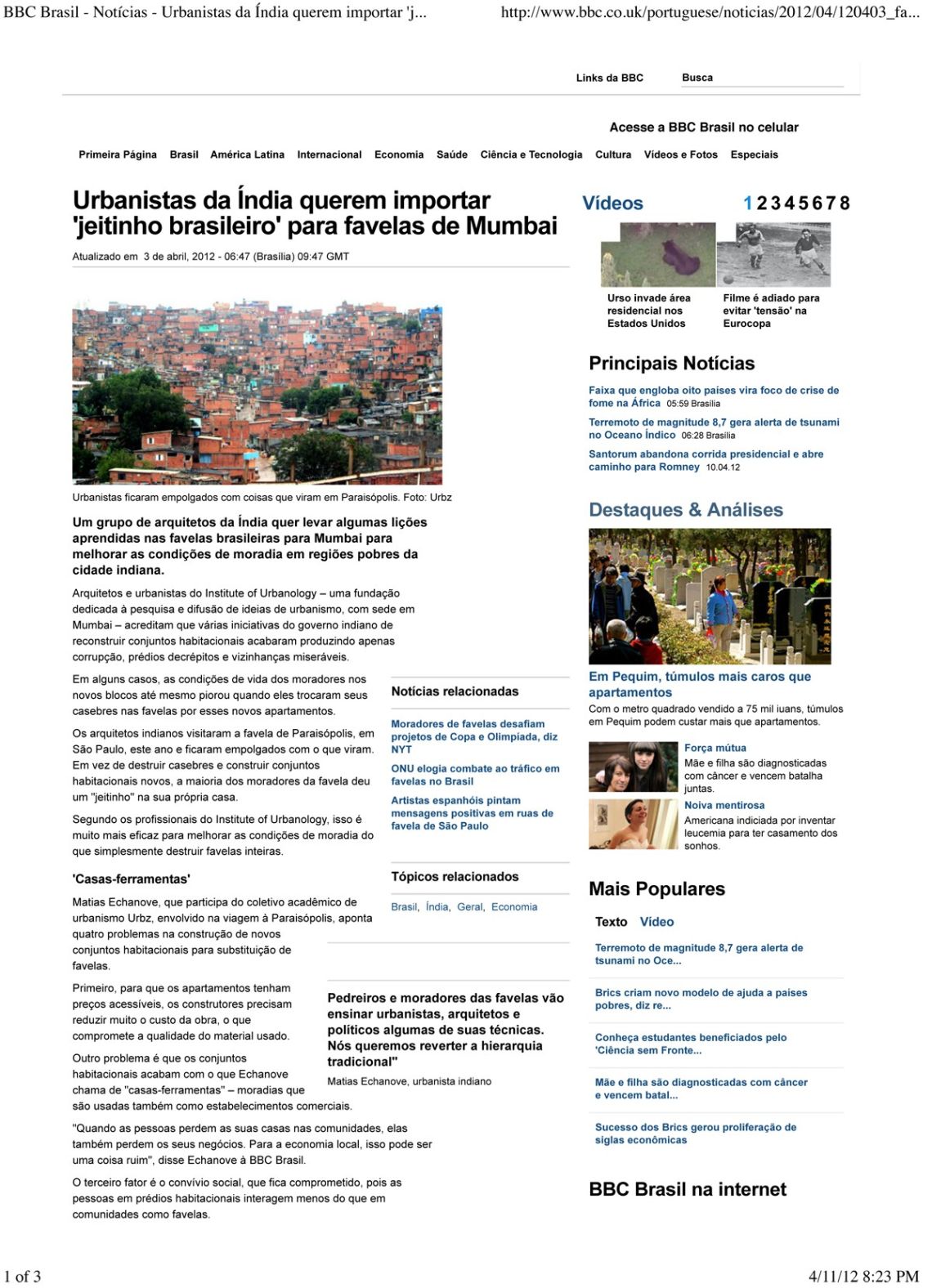 We are on a backlog of news from Sao Paulo. Here is a nice video by the collective LiveinSlums (Milan/Nairobi) summing up the Sao Paulo Calling event in Paraisopolis, which we are part of. It is in Portuguese, Spanish and English with Italian subtitles! This pretty much covers more than a decent amount of the world from where people got involved in the project. Milan, Sao Paulo, Mumbai and other cities dialogued with each other, with the favelas of Sao Paulo being the focus and point of inspiration. What is heartening is that the connections we evoke between our work in Dharavi, Mumbai and Paraisopolis, Sao Paulo seem to have became a distinct new arc in this multi-city story. A short feature was also aired on SBT Brasil yesterday: Click here to see it.

It was picked up and presented as an article published in BBC Brasil about what Mumbai could learn from Sao Paulo. It mentions our project for a Paraisopolis-Dharavi Institute of Urbanology next year. This institute began as a speculative exercise, a piece of fiction. For us, fiction is all about creative possibilities that are waiting to happen. It propels us into making new realities and conjuring them up is only the first step towards their actual realization. The Institute is tentatively visualized as a program in which urban practitioners of all kinds – architects, planners, activists and artists among others – from all over the world, come and learn from the residents, local builders, contractors and others from the neighbourhood of Paraisopolis. They learn about construction techniques, local architecture and several other aspects of urban life which are of relevance to people all over the world. Look out for future updates on this page.

A group of architects from India wants to take some lessons in Brazilian favelas to Mumbai to improve living conditions in poor regions of the Indian city.

Architects and planners of the Institute of Urbanology - a foundation dedicated to research and dissemination of ideas of urbanism, based in Mumbai - believe that the Indian government has several initiatives to rebuild housing ended up producing only corruption, decrepit buildings and neighborhoods miserable.

In some cases, the living conditions of residents in the new blocks even worse when they swapped their hovels in the slums by these new apartments.

The Indian architects visited the slum Paraisópolis in Sao Paulo this year and were thrilled with what they saw. Instead of destroying houses and build new housing, the majority of slum dwellers has a "knack" in your own home.

According to the Institute of Professional Urbanology, it is much more effective to improve the housing conditions than simply destroying entire slum.

Matias Echanove, who participates in the collective academic urbanism Urbz, involved in the trip to Paraisópolis, identifies four problems in the construction of new housing to replace slums.

First, that the apartments are affordable, builders need to greatly reduce the cost of the work, which compromises the quality of material used.

Another problem is that the housing end up with what Echanove calls "tool-houses" - homes that are also used as shops.

"When people lose their homes in the communities, they also lose their business. For the local economy, this may be a bad thing," said the BBC Echanove Brazil.

The third factor is social interaction, which is compromised as people interact in residential buildings less than in communities such as slums.

"In mass social housing, you can feel even more insecure than in the slums. Slums of Mumbai and communities have something planners call the 'eye in the street', ie, there is always someone roaming the streets," says planner.

"One thing that caught our attention in Paraisópolis is that in parts of the favela we had a greater sense of security than in other parts of Sao Paulo, as in the city center. In the favelas, there are more families and workers circulating, which makes the environment more enjoyable. "

Finally, the planner believed that the building construction leads to corruption.

"The construction industry is always one of the most corrupt economy. In general, are always the same players who win public contracts."

Another advantage observed by planners during his visit to Paraisópolis is what professionals call "incremental development" - residents who use their incomes to improve their own houses, building more floors in a house and "puxadinhos."

"We have seen cases in Paraisópolis rather curious, as a resident who had improved their home over 18 years. This forms a cycle much richer urban and economic development."

He recognizes that there are serious problems in the slums, especially when the government does not provide good roads, sanitation and electricity. Another flaw is that slums without any urban planning - especially those built in areas at risk - are more vulnerable to events such as floods. To Echanove, however, this can be resolved with works by the authorities, not the removal of slums.

Lessons can be enjoyed in places like Dharavi, one of the five largest slums in the world, whose total population is estimated between 600,000 and 1 million people.

"Construction workers and slum dwellers will teach planners, architects and politicians some of their techniques. We want to reverse the traditional hierarchy of public authority and show that we have things to learn as professionals," says the director of Urbz.

This year, the organization of the prestigious Indian college students took Sir JJ College of Architecture, Mumbai, for Brazil, where they spent hours observing the techniques developed by the masons of the Brazilian favelas. This week was launched with an exhibition of photos taken slum in Sao Paulo.

With one foot in the village and the other in the city, migrants have done more to urbanise India than any development scheme (The Hindu, 12.03.17)