In this article, we go across the border to Orangi, a town in the western district of Karachi, Pakistan, a city that was once part of the colonial Bombay Presidency. Bombay and Karachi used to be referred to as twin cities. In this article, we will look at the Katchi Abadis of Orangi, where residents have built not only their homes but also streets, lanes, and sanitation systems for the neighborhood.

Karachi, an important colonial port city in Pakistan, was governed by the residue of the colonial elite for a long time. In 2006, it was estimated that 62% of Karachi’s population lived in ‘Katchi Abadis’ (literally translated as unbaked settlements in Urdu). One such Katchi Abadi that is now home to close to 2.6 million people is Orangi, one of the 18 towns of Karachi. The Orangi township began as a plot scheme for the government to accommodate refugee populations who were living in squatter settlements within Karachi. The government plan consisted of 560 hectares of land and was initiated in the 1960s. Families who moved to Orangi built their own homes with the help of informal contractors, and these settlements came to be known as ‘katchi abadis’.The settlements’ population soared in the early 1970s when thousands of people migrated from East Pakistan (now Bangladesh) after the 1971 war of independence.

Akhtar Hameed Khan, a renowned social scientist proposed that he would study the situation in Orangi and come up with community-based solutions for the improvement of physical and social conditions in the settlements. An understanding between him and Agha Hasan Abidi, the president of a prominent Pakistan charity led to the establishment of the Orangi Pilot Project or OPP.

Akhtar Hameed Khan spent the first six months in Orangi speaking to the residents, after which he concluded that the most important social and physical development issue in Orangi was sanitation and that a community-based program could be built around it. In 1980, Akhtar Hammeed Khan started working on the Orangi katchi abadis, with clearly defined objectives. He sought to build models through actionable research that would overcome constraints faced by government agencies in the provision of physical infrastructure and social amenities to low-income settlements. The empowerment of communities as part of the development process was an essential part of his initiatives. Akhtar was adamant that the models be designed in such a way that they can be part of government planning policies. The result was models which encourage local initiatives, make use of local resources, and build on the homegrown community’s capability to look after their own needs while also fostering a more equitable partnership with government development bodies. 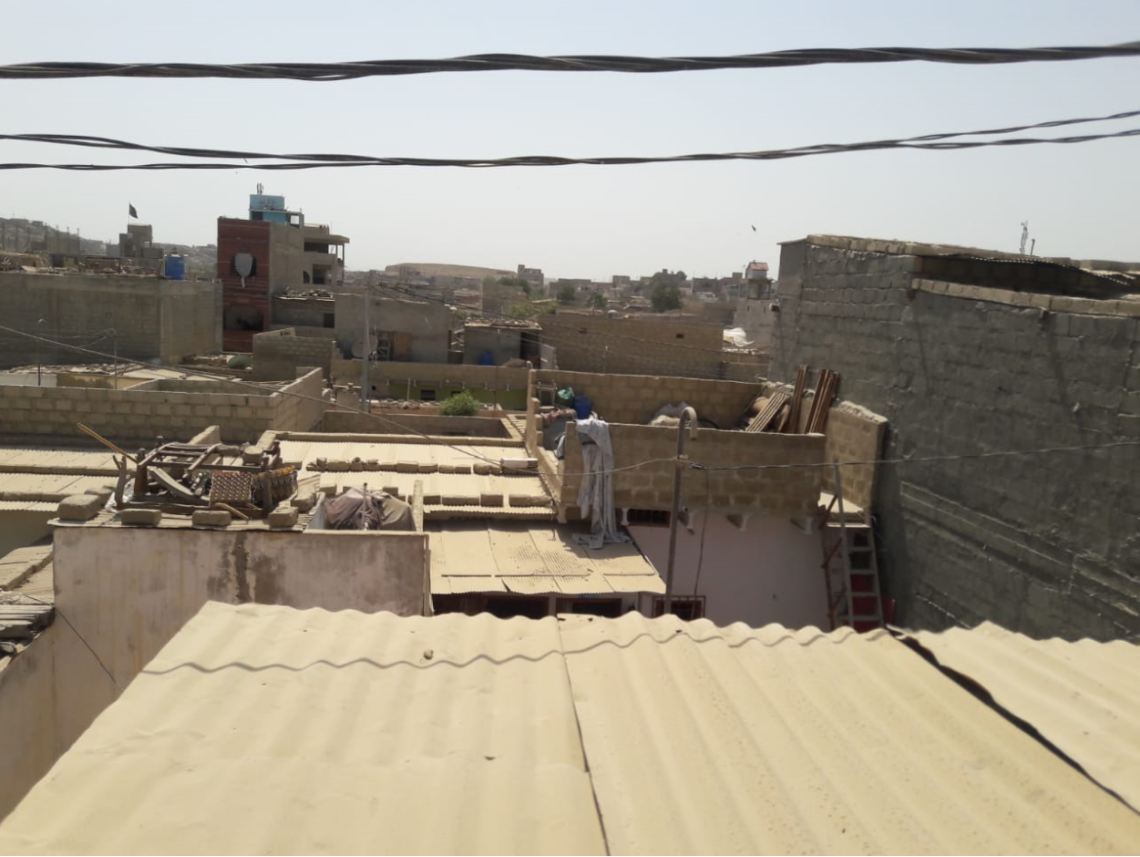 Thallawalla and the makers of the neighborhood

In Karachi, the unaffordable land market and arduous procedure of acquiring a developed plot led to the formation of homegrown neighborhoods. The initial squatter settlements in the early 1970s developed through unorganized invasions. These were poorly planned and housing was temporary, constructed with materials such as reeds, bamboo and mat. Unorganized invasions gave way to organized, though illegal, subdivision and sale of state land by informal sector developers (middlemen). Planning standards improved as a result of this change.

Thallawallas are the architects, engineers, financers, and contractors for the homegrown settlements of Karachi. The Thallawala, is an entrepreneur with knowledge of construction who sets up and manages a builders yard in the settlement. Thallawalas manufacture building materials, provide advice on building techniques, and provide water and credit loans for the new settlements. As a result, the thallawalas provide the minimum level of infrastructure required for a new settlement to be built. Taking into account the existing social infrastructure, the Orangi project worked by focusing on developing the thallawalla’s skills and sourcing cheaper building materials for them.

The Thallawalla is an entrepreneur, when he sees a new settlement come up, he sees an opportunity and opens up a “thalla”(meaning a place where bricks are made and sold). He manufactures building materials, hires block makers, carpenters, masons and makes an arrangement for finances - to develop his business and give material on credit to homeowners in the settlement. In most cases, the thallawalla is a businessman from outside the community, who forms ties of friendship with the community. Once enough houses have been built and business is no longer good, he packs away his thalla and moves to where a new settlement is being planned or built.

The existence of Thallawallas and a culture of ‘self-built’, provided residents with the agency and local knowledge required to finance and build the sewage systems in Orangi. 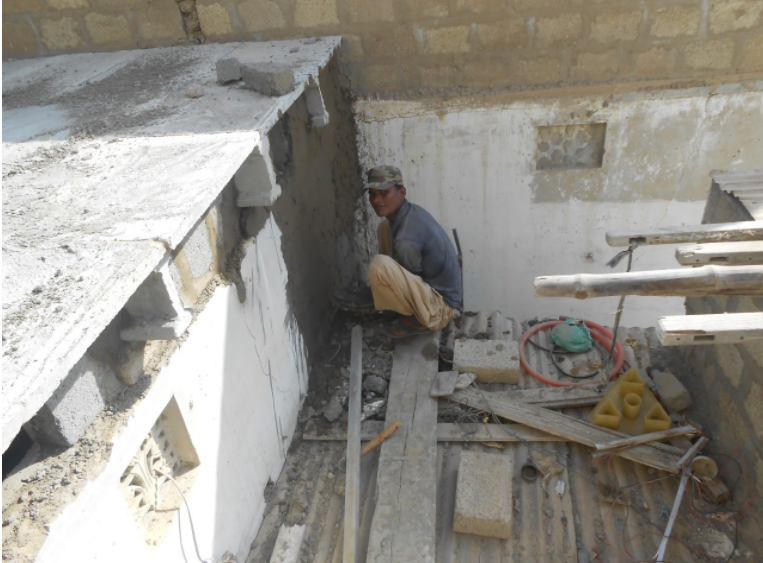 Initially, the middleman who supplies the land for katchi abadis arranges for water supply through tankers and transportation via bus routes. As the settlement grows and the neighborhood consolidates, there is a need for regular water supply, sewage disposal and public services like schools and clinics. Residents then lobby the government for utilities, but due to lack of or ad-hoc government initiatives, they often resort to relying on themselves to arrange for services. The Orangi area was the largest squatter settlement in Karachi, at the time, so the Karachi Metropolitan Corporation (KMC) did not extend services to the Orangi neighborhood due to its unauthorised status.

When the Orangi Pilot project (OPP) began their work in 1980, it recognized resident’s efforts in the provision of sewage disposal, water supply and other services. The OPP decided to bolster resident’s initiatives by providing social and technical support while keeping in mind the social dynamics that resulted in the creation of Orangi. The community of Orangi then financed, designed and built their own low-cost sewerage system. Initially, the KMC refused to connect the area’s sewer system to the existing city sewers. However, the gaze of international media on Orangi and the OPP pressured the KMC to cooperate. The OPP sewer pipes are paid for, constructed, and maintained by families who live on each street, with the municipal corporation covering one-eighth of the costs.The community's participation in the construction of the sewerage systems and the streets above them has given them a sense of ownership and belonging to the area.

Many houses in Orangi are constructed  with the help of skilled masons and hiring unskilled labor. These houses are primarily made of precast concrete block- which is used for the foundation, plinth and walls. Galvanised iron sheets along with iron trusses or timber joists make up the roofs. The walls are usually unplastered and cement concrete is used for flooring.

Houses usually consist of 3 rooms, a kitchen and a shared bathroom built around a paved courtyard. Thallawallas provide houses with concrete blocks, lintels, small slabs and concrete screens. The steel grills, windows and doors are manufactured by a ‘lohar’

Katchi Abadis originally consisted of 80-120 square metre plots, with single-story buildings. Today, many of the original single-storey settlements have expanded to house extended families of 12-15 persons with a shared toilet.The home constructions in these settlements are invariably financed by savings from women saving committees known as BC committees (Ballot committees) where a group of 15-20 women collectively save money from their household.

The social spaces in Orangi are mainly streets. The ‘gully’ (lane) and ‘chowks’ (junction) are spaces where men drink tea and discuss going-ons, women socialize, children, play cricket and neighborhood functions are held. The streets are often also used as a ‘Bazaar’ (market) space.

Thus, the public spaces of Orangi are created and not planned, by residents or local authorities. 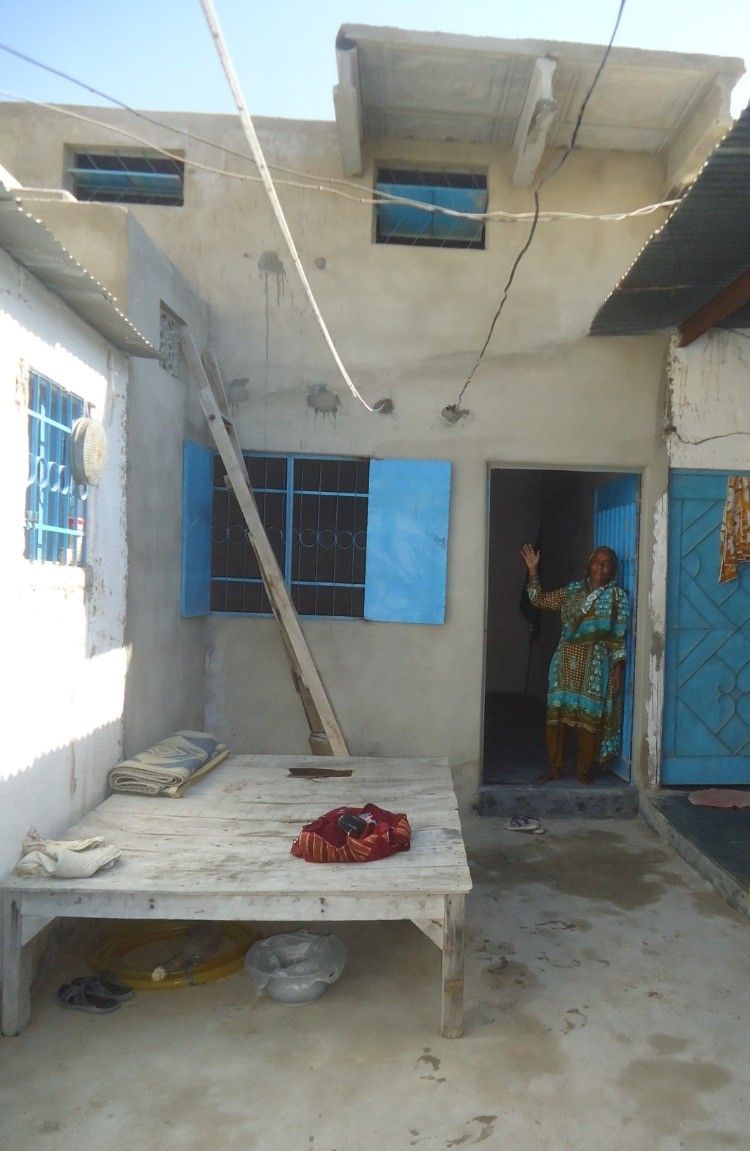 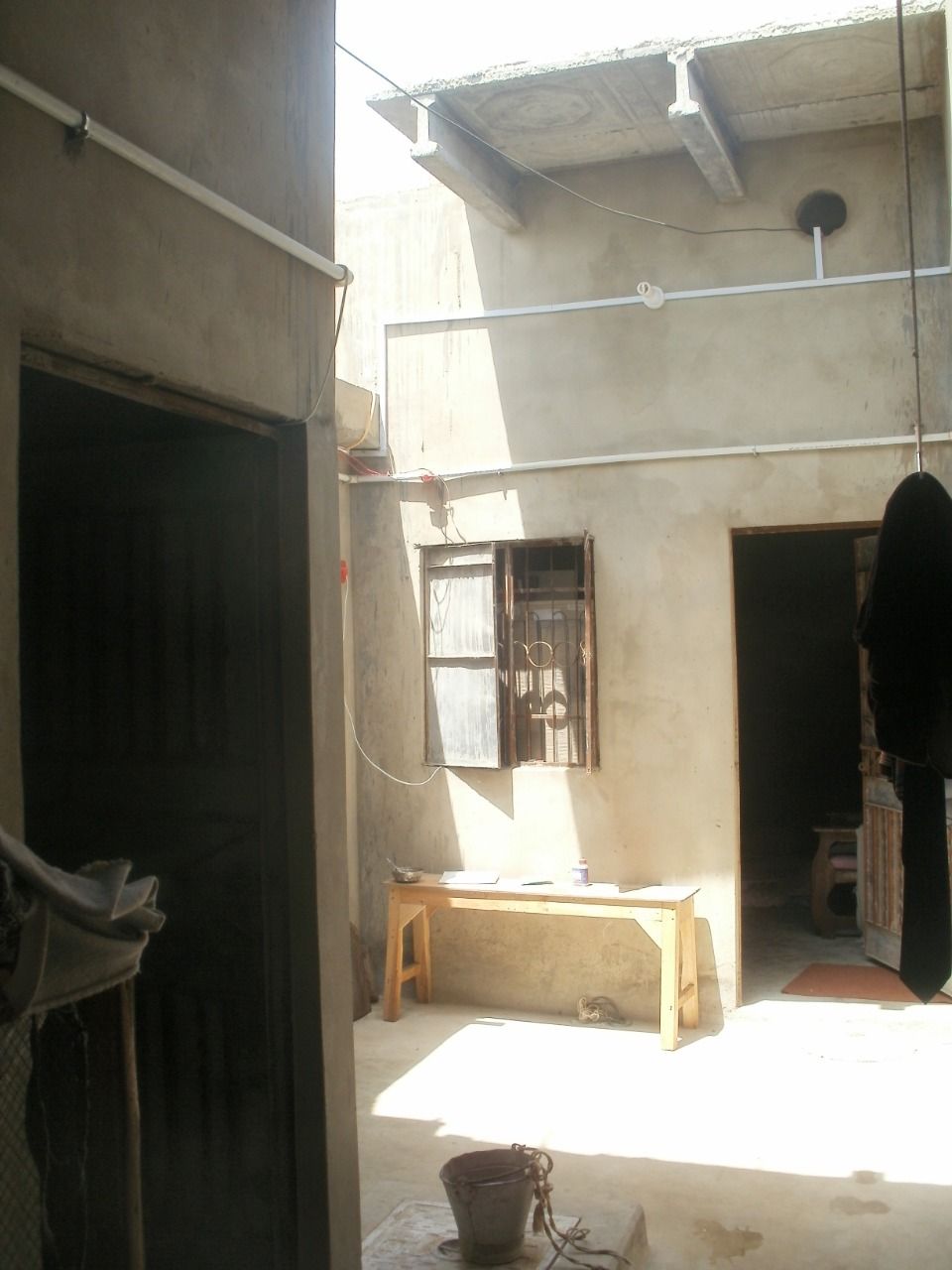 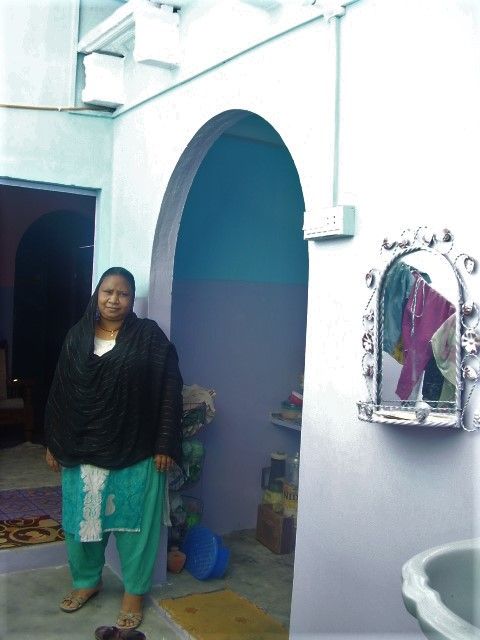 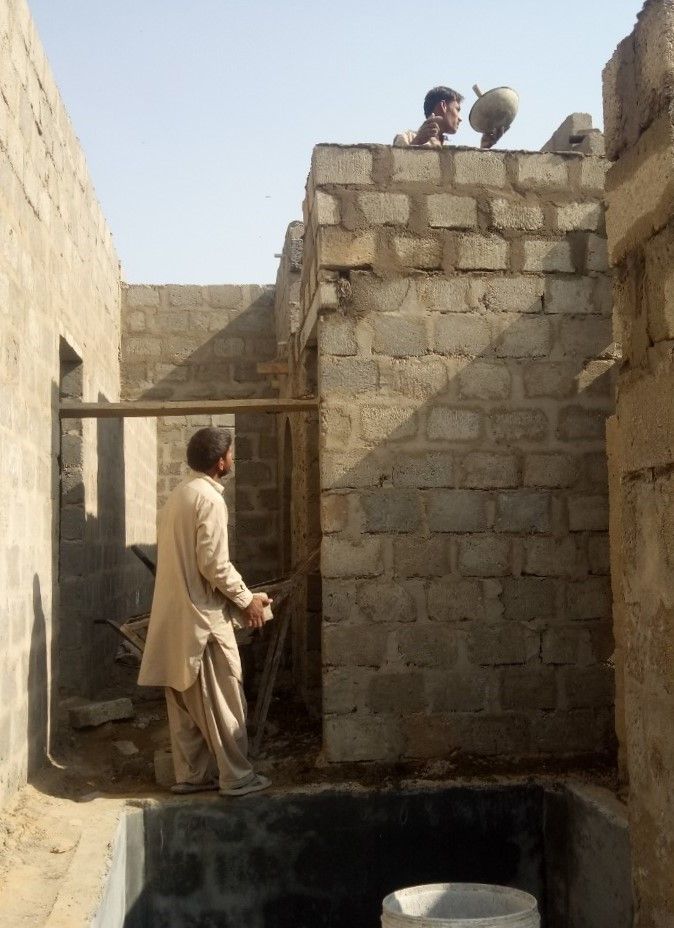 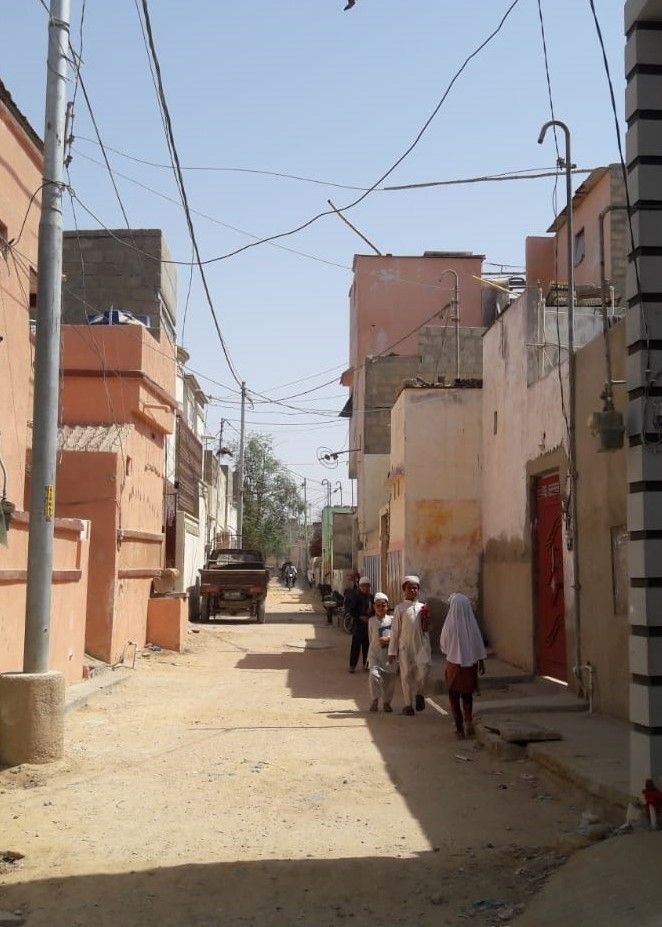 The OPP has exhibited that residents can finance, manage and maintain services such as sewerage, water supply, solid waste disposal and security at the neighborhood level. The government’s part in such a model is to support the residents' efforts with the provision of larger facilities such as trunk sewers and treatment plants, water mains and water, solid waste disposal facilities and landfill sites. This component sharing model shows that when the government partners with residents of homegrown settlements like Orangi, affordable, liveable and sustainable neighborhoods can be built through local initiatives. The Orangi model has succeeded in developing a specific sanitation and construction technology that was consistent with the needs and economics of the community.

The homegrown settlements in Orangi still face some challenges such as persistent problems of water scarcity, floods, the threat of eviction, and turf conflict - where ethnic groups mark their land, usually based on trade and markets, and employ violent tactics toward those that encroach on their land. Residents of Katchi Abadis often sought security in their ethnicity and wanted to be with their own community, so they settled in areas where they were the majority. This resulted in the town being divided into ethnic zones.

Land still seems to be the most contested resource in Karachi, similar to the situation in Mumbai. Often the process of obtaining land rights for residents of homegrown neighborhoods is laborious and dangerous. Perween Rehman,  the former director of OPP and protegee of Akhtar Hameed Khan was documenting encroachments on government land to help residents of homegrown settlements be lawful leases of lands. When inhabitants are lawful lessees, obtaining land by forced evictions or fraudulent transactions is more difficult.

Despite these challenges, OPP continues its work with the vision of development from the eyes and perceptions of the community. The component sharing model of Orangi is now adopted in parts of southern Punjab and Lahore. Currently, there are three institutions operating under the Orangi Pilot Project; the OPP Research and Training Institute, which manages sanitation and housing; the Orangi Charitable Trust, which specializes in finances; and the Karachi Health and Social Development Association, which manages health programs. 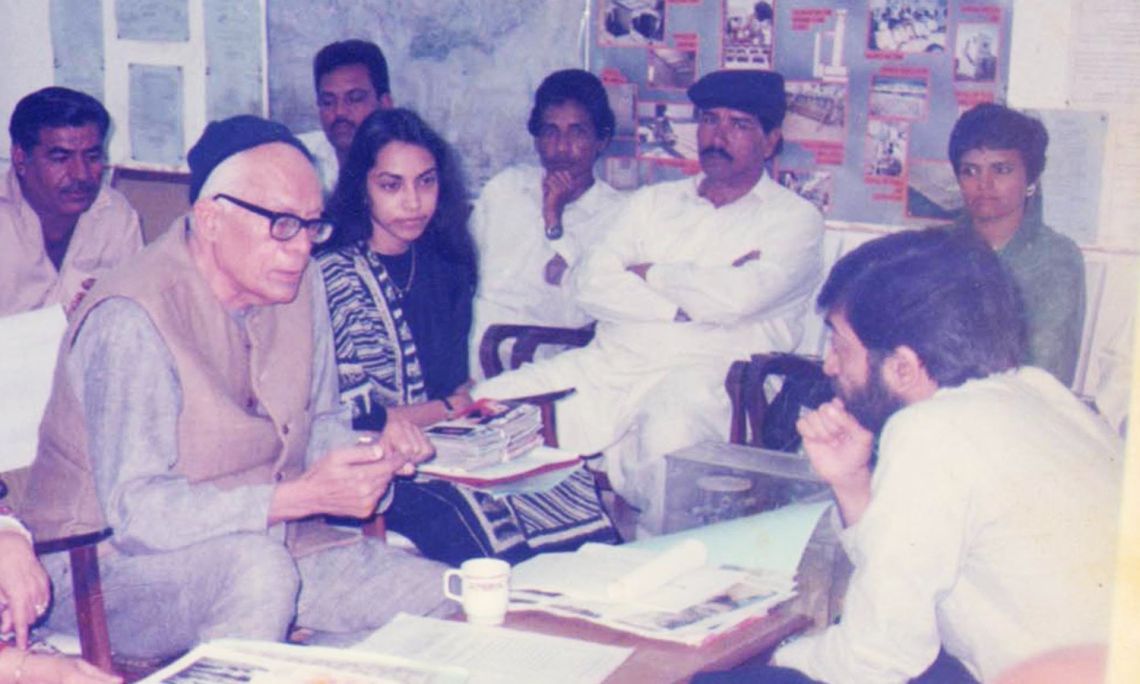 Acknowledgments: We would like to give special thanks to Arif Hasan for taking the time and effort to share with us his experiences and knowledge about his work in Orangi.

You can learn more about the Orangi Pilot Project and follow Mr.Hasan’s work in Karachi, here.

We would also like to thank Siraj Uddin from the Technical Training Resource Center (TTRC), for providing us photographs of Orangi, insight into his work in Orangi and the construction of homes in the township.