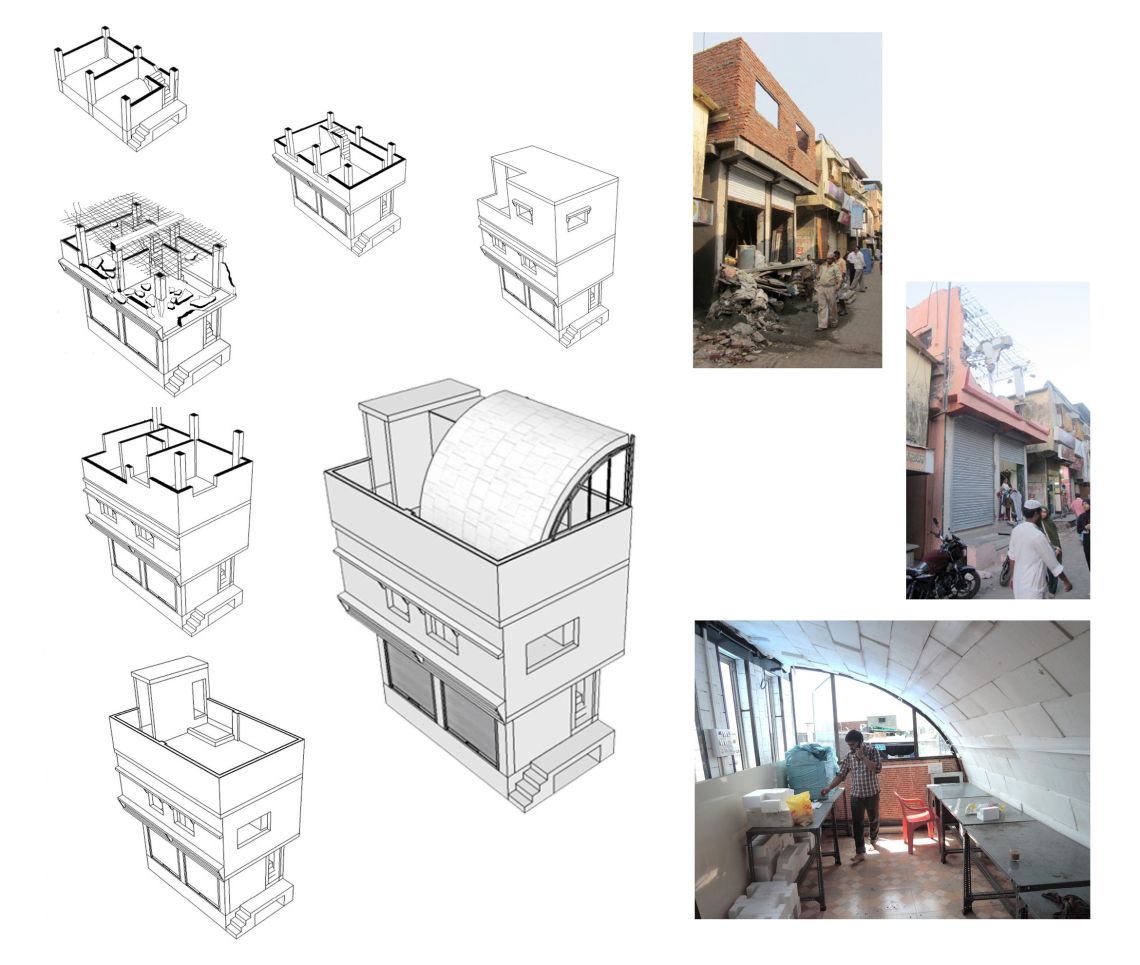 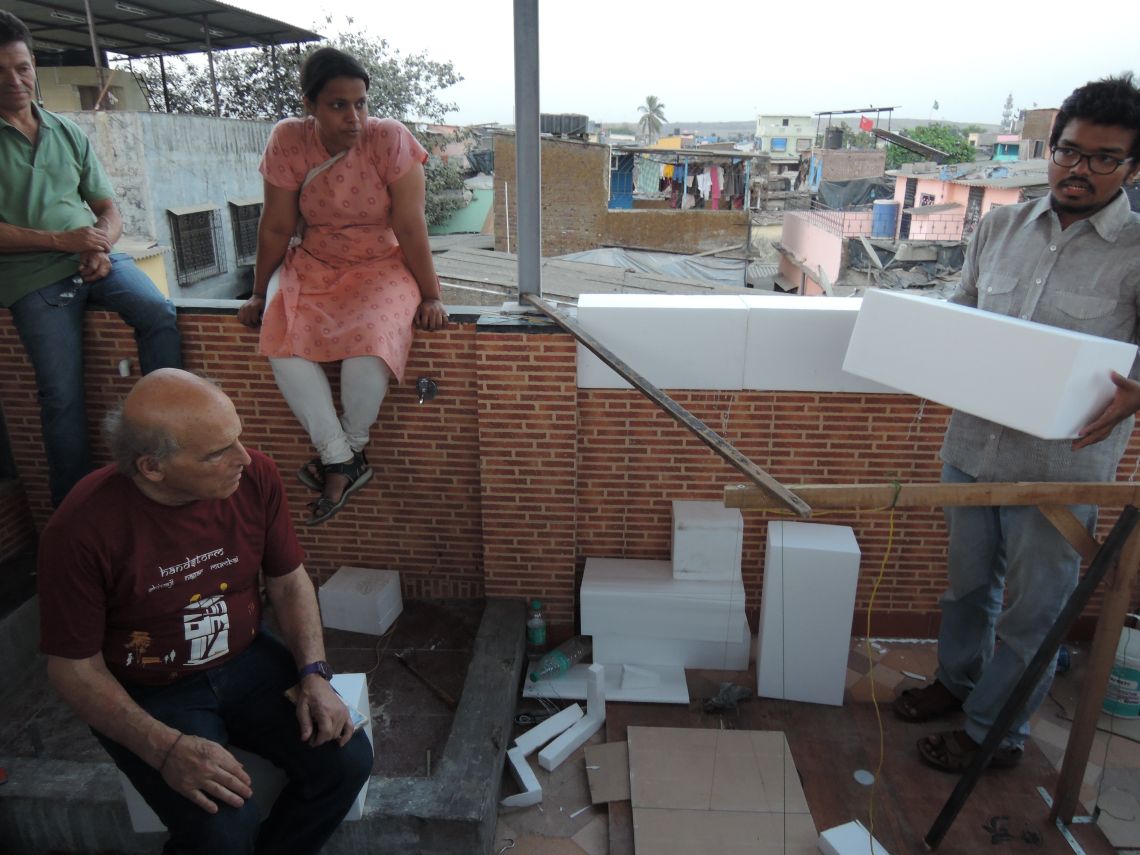 When we moved our office from Dharavi to Shivaji Nagar, (both in Mumbai and approximately 10 kilometers apart) we were simply following the trail of new opportunities that opened up for urbanology – our practice that brings together concerns of architecture, design, planning and anthropology.

Our move was accelerated by the fact that we spent a lot more time with local contractors and inhabitants in Shivaji Nagar than we had anticipated. Considering it is officially classified as one of the most marginal neighbourhoods in the ‘M Ward’ of the municipal map of the city – with some of its poorest socio-economic indicators – it was striking to observe the processes of incremental growth in place along with a vibrant local construction economy. When local contractor Pankaj Gupta invited us to work with him and was even ready to host us, we knew we had to move.

The new urbz office was to be set up on the terrace of one of the 50,000 odd structures in Shivaji Nagar that had come up, grown, been demolished and rebuilt several times. A process that routinely moves through a maze of bureaucratic landmines that residents here have to negotiate on a daily basis. The houses typically face the dilemma of locating themselves on the categorization somewhere between kuccha (impermanent; literal translation – raw) & pucca, (permanent; literal translation – cooked, prepared) structures. They have height restrictions of around 14 feet for a pucca structure. Beyond that material must technically be kuccha and ready to be dismantled anytime.

While initially planning our move, we had the opportunity to work with Anton Garcia and Debora Mesa of (POP Lab at MIT) on our collaboration for the exhibition at MoMA, New York. At that time we had toyed with the idea of working with a material they had been experimenting with – EPS. We were initially sceptical about the potential of using this material in Mumbai. It is light and can take pretty much any shape, but it is also relatively expensive compared to conventional construction materials used in homegrown neighbourhoods. It is also not environmentally friendly.However, we decided to test it for ourselves by using it for the new office. 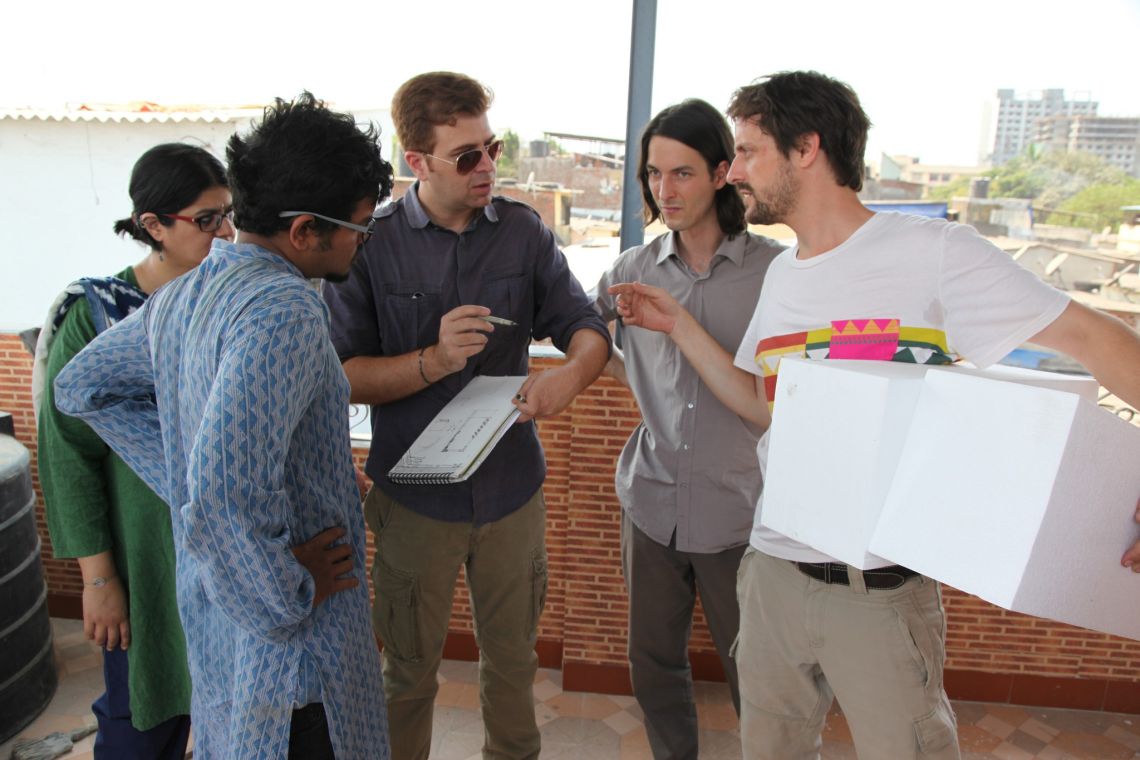 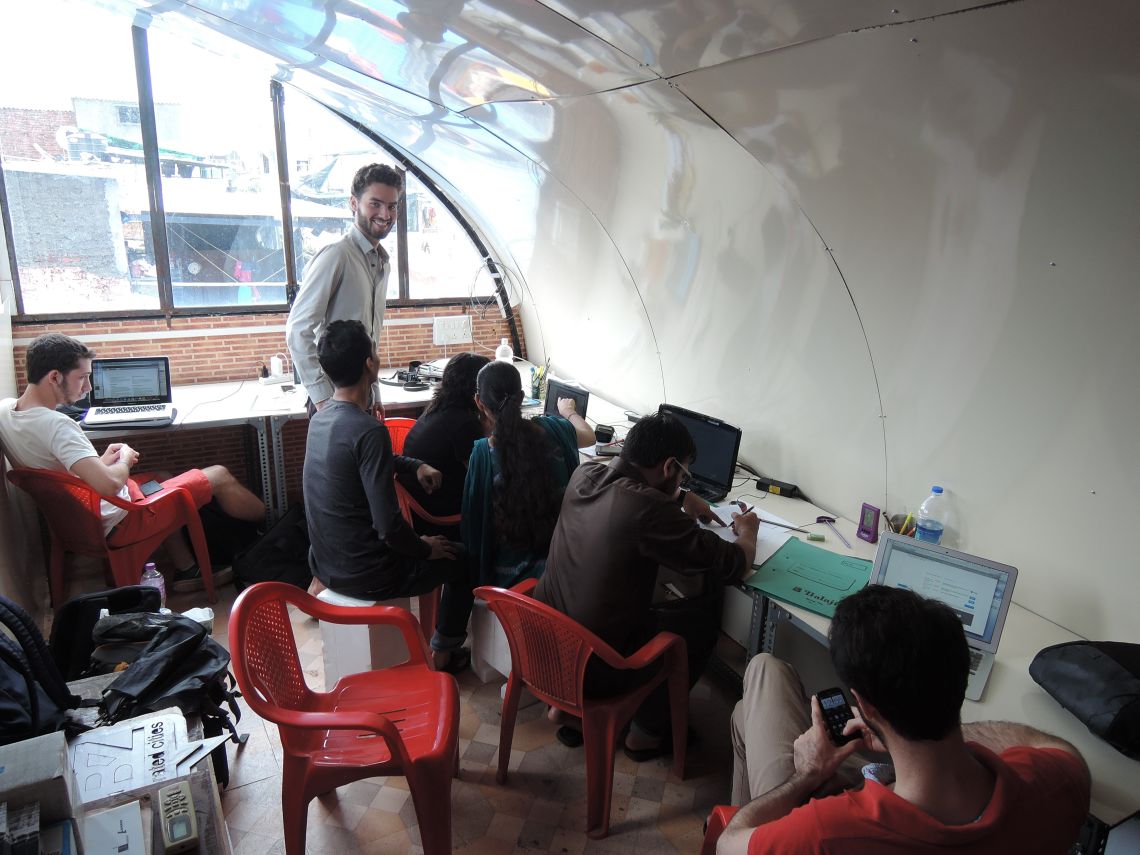 Whatever followed was really a spin-off of the several discussions with POP Lab, but had no connections with their own on-going experiments. The thing is – our local partner Pankaj Gupta, saw many possibilities for constructing our new office with it, which was encouraging. Technically it was a lightweight kuccha material so we could use it to build over an existing pucca structure. If designed appropriately, it could also be dismantled easily, thus broadly working within the legal guidelines.

This was how a portable, lightweight structure was conceived for the first time in the neighbourhood, which Pankaj Gupta, was eager to translate into physical reality.

Expectedly, there were several challenges. Light-weight EPS blocks had to hold together without being glued, but also be ready to face high wind pressures and monstrous monsoon rains for about 4-5 months a year. At the same it should be able to deal with intense, humid heat for the rest. While the insulating qualities of EPS worked for the summers, it was the monsoons that would be the real test.

Many weeks of discussions and experimentation between the urbz team, lead by Shardul Patil and Jai Bhadgaonkar, and our collaborators from sP+a, a cutting edge architecture studio in Mumbai, resulted in the final form of  the structure. A half-igloo vaulted shape, held together by a steel frame with accurate measurements calculated for individually cut blocks that would interlock and hold.

We kicked off the construction during our Handstorm Workshop, when we constructed – from scratch – an EPS cutting machine using a heated wire that sliced through the material to customize the shape of each block.

We had to make sure that the steel members which would frame the EPS could be removed easily and transported when needed. Getting local artisans who worked with steel welding techniques was a crucial move.

Step by step the structure evolved – from fabricating the framework, nailing it to the floor, cutting the EPS material into the right shapes, weaving the blocks into a tight wall, covering the structure with protective cover, adding the windows and doors. Eventually the structure was ready and it was almost unbelievable when we finally moved into a fully functional office space made quite literally from a pure figment of our imagination!

It was good for us to explore the potential of a material which we didn’t initially believe in. We still think that EPS is too expensive to have a real future in affordable housing in India. Moreover, the environmental cost of producing the material and the fact that it is not biodegradable at all, are serious issues, which discourage its widespread use. The biggest barrier though, is its perception by potential users as belonging to the family of kaccha material when all aspiration is directed towards pucca structures!