urbz was proud to be part of the organising team of EnteKochi 2020, an urban design competition with a participatory approach. The competition was planned for, announced and conducted during the pandemic induced nation wide lockdown. This meant an entire realignment of the way we practice participatory planning - face to face and on the ground! Working with the constraints and limitations of the new normal, we navigated through the process by constantly adapting and innovating ways to engage with people. From reaching out over the phone, strategically using social media platforms, developing an interactive website and embracing new technology like online participatory mapping tools - we truly experimented with the participatory process!

EnteKochi is an urban planning endeavour initiated by Kochi Municipal Corporation (KMC) and GIZ (German Agency for International Cooperation), India, to design the future of Kochi, Kerala, India. What makes EnteKochi so significant for the Indian urban planning realm is it’s participatory nature. After being involved in the first phase (EnteKochi 2019) of city-wide community workshops, urbz (Mumbai) partnered with Design Combine (Kochi) to deliver the mandate of organising the EnteKochi Urban Design Competition, 2020. The larger international team also included German urban planning practice urbanista based in Hamburg. Essentially, the process brought together local communities and professionals to design a sustainable and resilient future for Kochi.

After multiple meetings within the organising team, with local stakeholders, and several days investigating various locations in the city we zeroed in on the site for the competition - the Mullassery Canal precinct in the central business district of downtown Ernakulam, Kochi.

The canal was initially constructed for inland mobility, it is now part of the heavily urbanised fabric of the city and has seen its share of neglect and apathy. The canal was also identified as a crucial element to help mitigate the severe floods that have plagued the precinct. As the organising team, we wanted to bring a strong focus on promoting inclusive ecological development that is sustainable, equitable, and acknowledges the cultural and social context of Kochi. We organised consultations and focus group discussions with community members and government representatives to understand several criticalities of the site. We developed a comprehensive and elaborate design brief in collaboration with local residents and users. The design brief was based on comments and feedback from the community and highlighted the actual challenges faced by the neighbourhood. Representatives of Residents Welfare Associations (RWAs), Kudumbashree groups, vendor associations, students and faculty from neighbouring institutes participated in online focus groups and review sessions of the design brief.

The Entekochi Urban Design Competition Brief thus asked participants to come up with innovative urban design solutions based on the necessities and experiences of the local community. We structured and publicized the competition through various channels to ensure that it was accessible and open to professionals not only from the urban planning community but also experts from social and environmental sciences. On announcing the competition we nervously waited and hoped that we had succeeded in building enough momentum to counteract all the limitations of the lockdown. Despite the extraordinary circumstances more than 300 enthusiastic professionals worked diligently over 6 weeks, sending in more than a 100 entries!

From the many excellent entries, twenty-one teams were shortlisted. To do this fairly and anonymously we developed a rigorous methodology that allowed us to systematically go through all the submitted work. We organised and conducted an online jury with nine jury members each in a different location around the globe! The jury panel was curated to be multidisciplinary including urban designers, gender experts, transport planners, water and climate change experts, local representatives, and representatives from the organising team.

After two weeks of preparation that culminated in a two day jury session the three winning teams were selected. The jury carefully considered the perspectives, visions, and design approach of the entries to decide on the winners. The winning teams are now jointly working on a master plan for the Mullassery Canal Precinct as well as detailed project reports (DPRs) for strategically chosen urban interventions along the canal. We organised the first online interaction between the team and senior engineers from city wide departments and planning bodies. We will continue to closely work with the teams and support them in this process by organising several more meetings with diverse stakeholders and experts. We hope that these meetings will help ground the winning designs and achieve implementability of the selected ideas.

EnteKochi 2020 has been an immensely fulfilling experience. Not only did the competition take place on a national scale and involved diverse groups, the entire process was conducted during a nationwide lockdown. Despite this, we still witnessed enthusiastic online participation and involvement even during the height of the pandemic. This has reaffirmed our conviction that a truly sustainable future is not out of reach when it is participatory in nature. The EnteKochi Competition exemplifies the synergy of people’s will and skills to co-create healthier and thriving neighbourhoods for all. 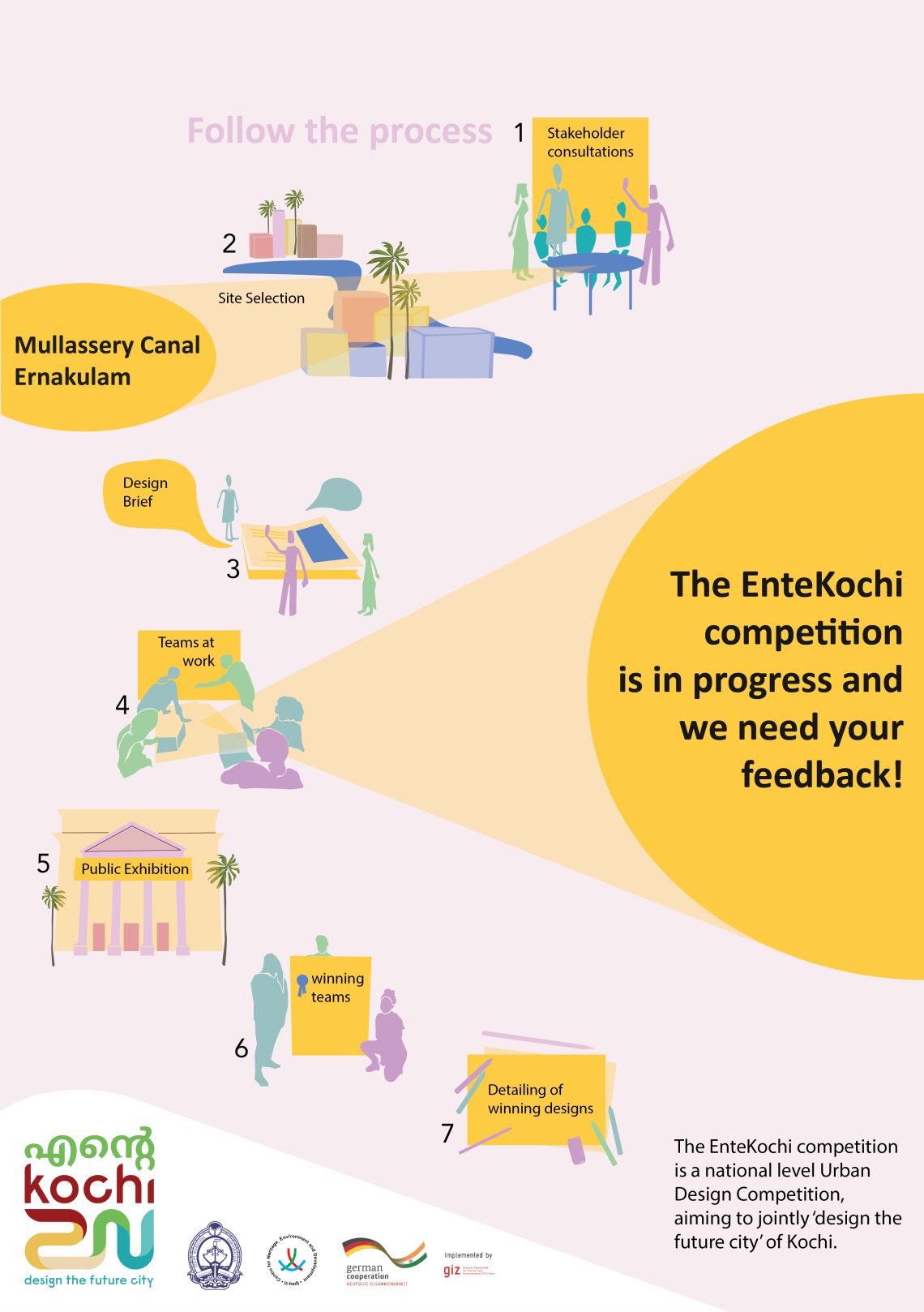 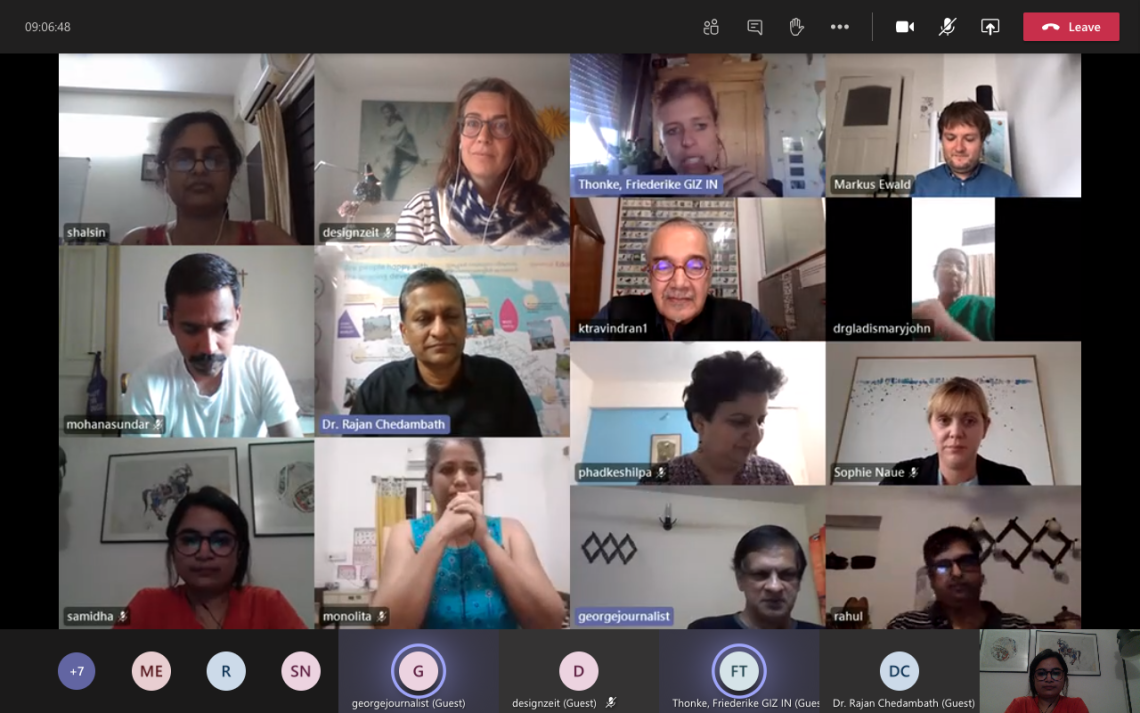 Remember the Urban Typhoon workshops in Kochi? These workshops were part of the EnteKochi citylab. We are now back with the Entekochi competition. This is a national level Urban Design Competition, aiming to jointly ‘design the future city’ of Kochi. It is envisaged to plan and then facilitate the implementation of an integrated civic project.

The Kochi Municipal Corporation calls all creative minds to participate!