As a continuation of the Makers of Homegrown cities series, we come closer to home and take a look across our borders. Homegrown settlements in Kathmandu Valley are dotted along the highly revered Bagmati river. This article delves into the establishment and lives of the Paurakhi Basti.

Following the passage of the Bagmati

Domestic migration within Nepal is determined by job opportunities and local politics. Many citizens migrate to the capital of Kathmandu to seek better income prospects compared to their hometowns or villages. A lack of affordable rental housing options has led to them residing in homegrown settlements which are often referred to as ‘sukumbasi bastis’. Sukumbasi is a nepali term that refers to both the settlers (people with no legal ownership of land) and their settlements in Kathmandu. Settlers refer to their inhabited area as sukumbasi as well, and the term has come to reflect a collective identity. They are usually migrants who move to the city to work as laborers, masons, factory workers, vendors, vegetable and fruit sellers, or traders and skilled laborers. Some residents migrated because of displacement due to political turmoil during the Maoist Insurgency and its after-effects.

Homegrown settlements in the capital are most frequently found on the banks of the Bagmati that winds its way through the cities of Kathmandu and Lalitpur in Kathmandu Valley. Rivers in Nepal are locally called ‘khola’ and people chose to settle at Bagmati Khola because the banks of the river were vacant. The Bagmati is a revered and sacred river for residents of Kathmandu Valley; however, it is also one of the most polluted water bodies in the city due to numerous direct discharge sources. Residents of homegrown settlements can no longer use the river water for personal use in fear of health risks. The social and cultural importance of the river prompted revitalisation and development plans for the Bagmati corridor that has been putting bankside settlements at risk of eviction.

Residents of homegrown settlements take on the task of constructing their homes themselves. Construction materials and tools are obtained either from a shop if a resident can afford them, or from materials that have been discarded by others or obtained from a kabadi (scrap dealer). Wooden planks, bamboo poles, tin roofs, and  the polypropylene (PPP) woven fabric obtained from rice bags are the most common materials used. The key is to be innovative and adaptable with whatever resources are available to the residents. 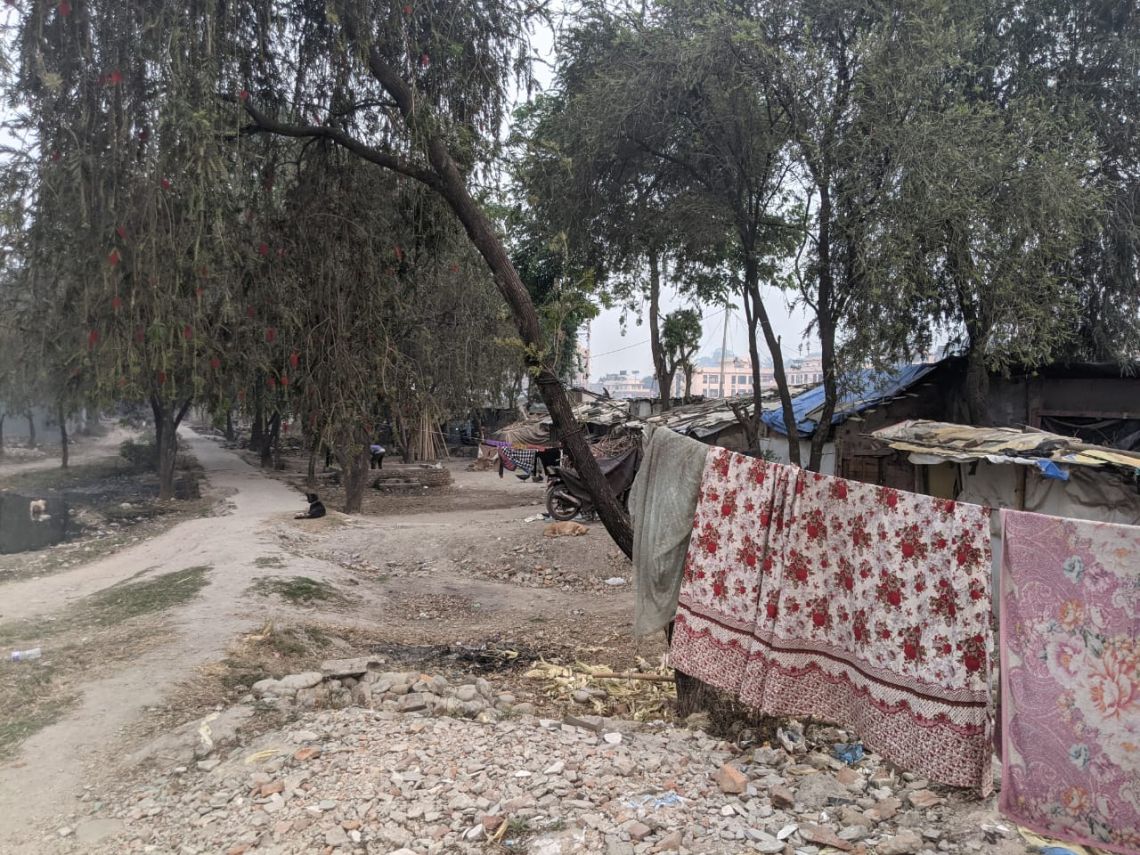 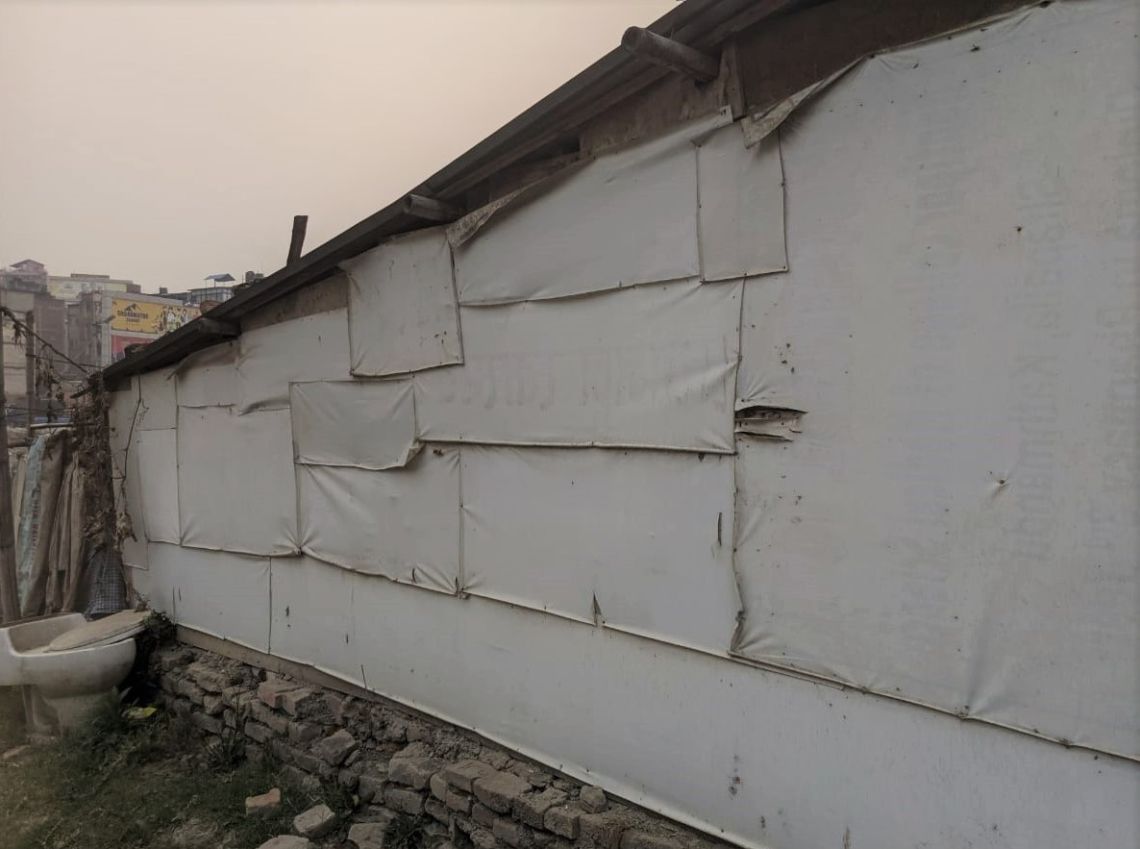 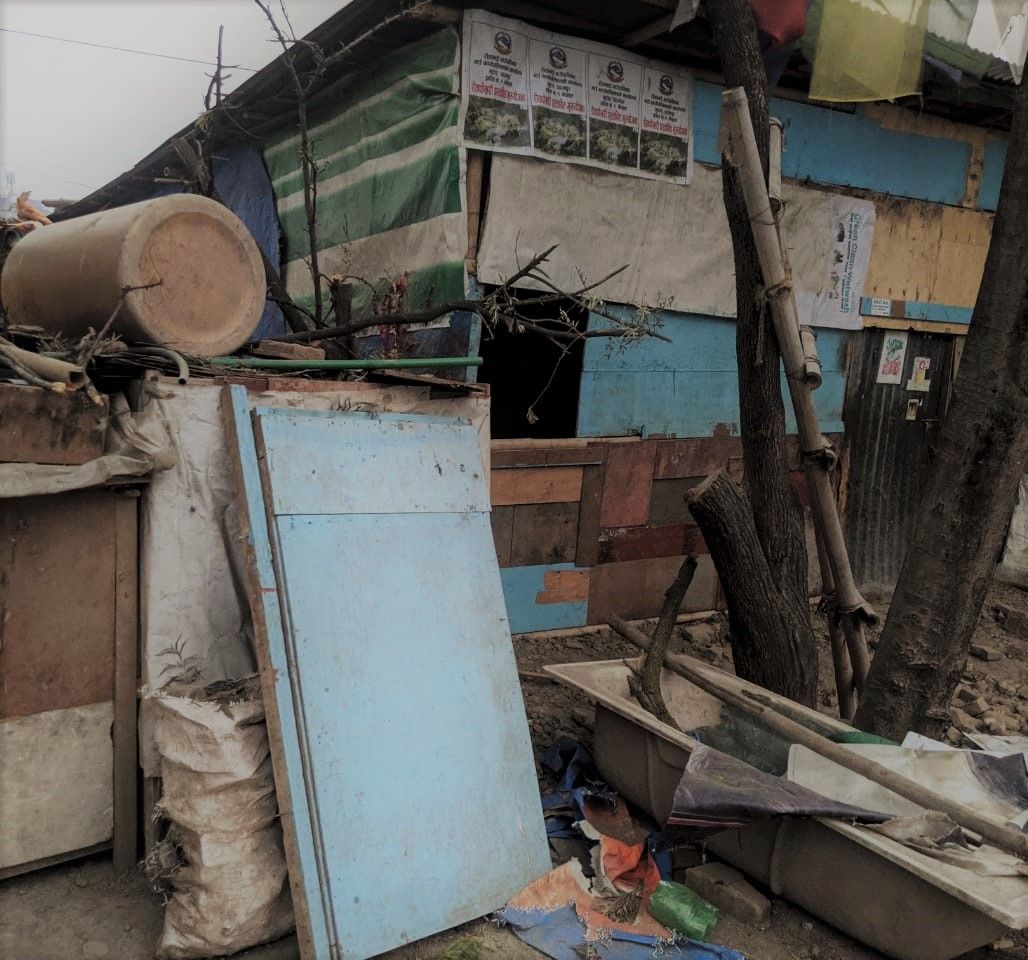 The evolving nature of settlements

Until 2013, there were around 260 houses in homegrown settlements scattered across the banks of the Bagmati. As political parties shifted, evictions and demolitions have left only around 136 houses remaining.

A shopkeeper who lives in the Paurakhi Basti in Thapathali moved to the area 16 years ago. Paurakhi in Nepali can mean self-reliant or self-built. When he first arrived at the banks of the Bagmati, the grounds were dense with shrubbery. He cleared the area he wanted to utilize of the bushes and left the trees untouched.

Another woman had moved to the settlement with her family when she was young. She now has a family of her own and sends her children to a nearby school. Both she and her husband work; she works as a housekeeper to provide for her family. She recounted how the basti had changed over the years- the community had collectively raised money to install a tube well in their locality. Recently, a church had installed two handpumps in the settlement as well.

The settlement didn’t have access to electricity up until three years ago. Most homes would use solar lights or candles. The majority of the houses are now fitted with meters and pay the Nepal Electricity Authority or Nepal Bidhut Pradhikaran every month like the rest of the city. Communal washrooms were also recently built in the settlements- they consist of three toilets and two bathing facilities. These kinds of projects are usually undertaken by local samitis (local organizations) such as Sukumbasi Samiti, that present the demands of the settlement to authorities. 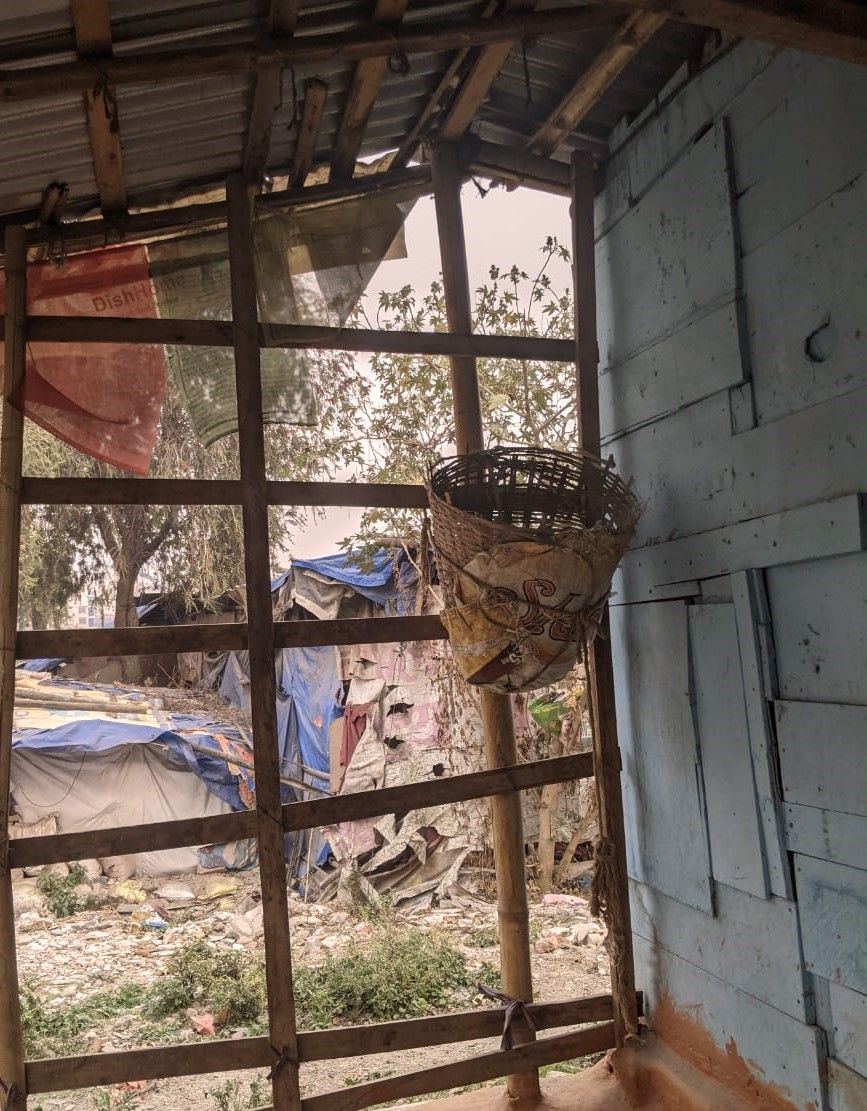 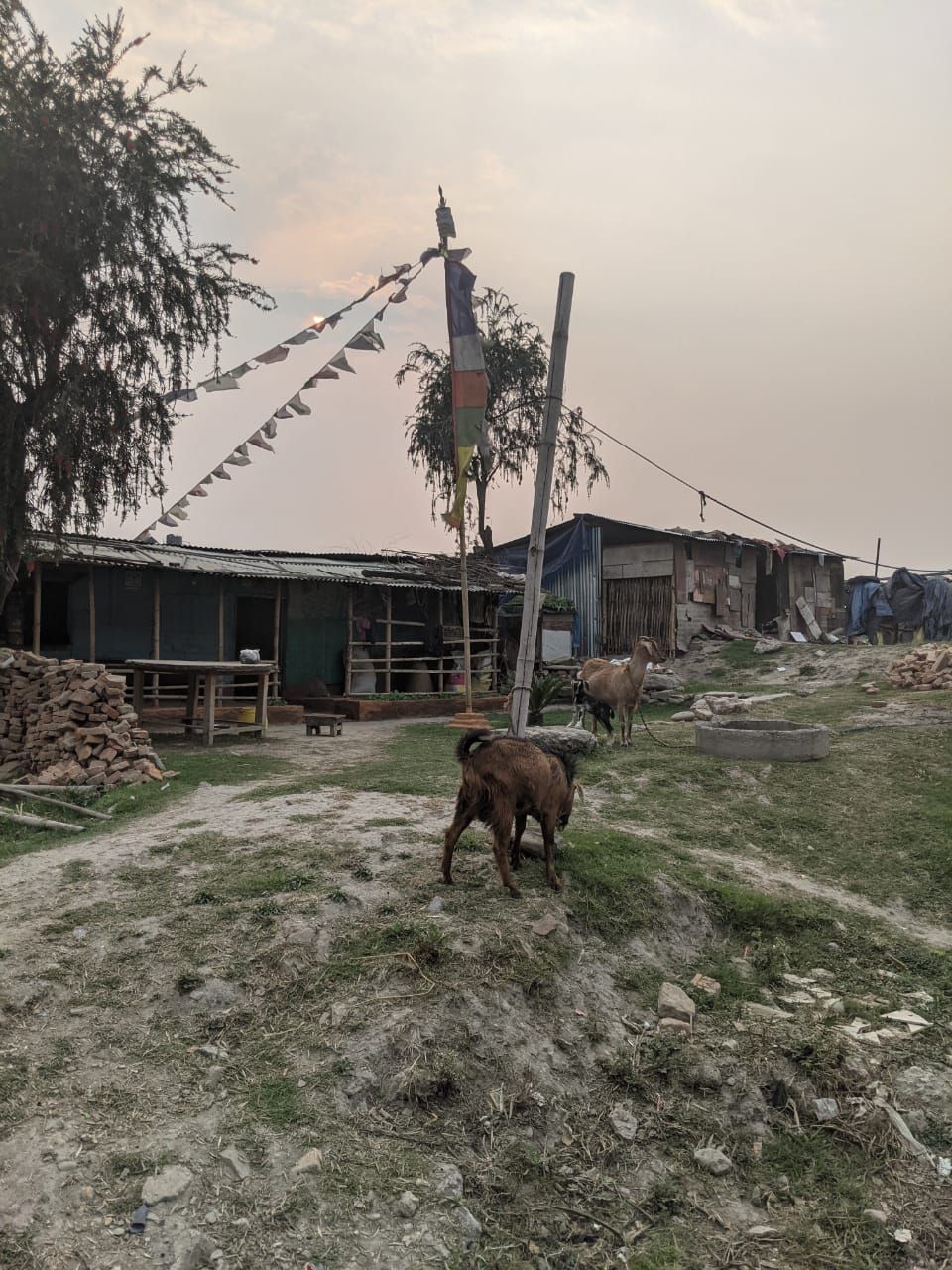 The need for participatory organization

Nepal is prone to earthquakes and the location of the settlements on the banks of a major water body makes them vulnerable to seasonal flooding as well. Some residents, such as the shopkeeper, can manage to shift the infrastructure of their homes to higher ground and simply rebuild. This is not a feasible option for many others in Paurakhi Basti whose homes fill up with the polluted Bagmati water. They simply scoop out the water that enters their house since there isn’t much they do to reinforce their house against the flooding. The settlements are mainly built through found and affordable materials, making-do, and improvising in the construction process. This helps in their ability to recover from natural disasters, like the 2015 Nepal Earthquake. The parts of their home that did suffer damage were quickly rebuilt or residents took shelter in the open spaces around their settlement.

Residents of similar bastis and homegrown settlements are wary of outsiders due to the constant threat of eviction and are apprehensive about being photographed. When homes get demolished, the residents simply rebuild in the same location or a new one. Plans to relocate residents to housing complexes or apartments don’t bode well since residents are rarely consulted about their needs. This is despite the fact that non-profit organizations and student volunteers approach the settlements regularly to study their social, political, and community-health conditions. Apart from the Paurakhi basti on the banks of the Bagmati, there are many similar settlements in Kathmandu Valley along the Bishnumati, Dhobikhola, and Manohara rivers.

There are also many older settlements that have been around for about 25 to 30 years in the Valley, such as the ones in Shankhamul, Bouddha, and Balaju. According to Moti Lal Lama of the Nepal Basobas Basti Samrakhshan Samaj (Society for Preservation of Shelter and Habitation in Nepal), even though these settlements may not have legal rights over the land they reside in, they have been socially and developmentally integrated into the city. The residents have constructed their homes while the government has pitched roads and provided electricity in the areas.

Residents of homegrown settlements in Kathmandu Valley are no strangers to the hardships and challenges that accompany displacement, migration, self-governance, and natural disasters. Like many homegrown settlements across the world, sukumbasi residents have a strong sense of community bonds along with the self-made nature of their communities that allows them to thrive. Efforts for inclusive collaboration between the residents of homegrown neighborhoods and government authorities is a necessity to build neighborhoods that can withstand the effects of external mishaps and caters to the needs of the residents.

Acknowledgments: We would like to give special thanks to the residents of Paurakhi Basti for welcoming us to their settlement and sharing with us their experiences and stories. We would also like to thank Mr. Moti Lal Lama of the Nepal Basobas Basti Samrakhshan Samaj (Society for Preservation of Shelter and Habitation in Nepal) for his insight into homegrown settlements of Nepal.