The Urban Typhoon workshop invites artists, architects, activists and academics from all over the world to ideate with residents, grassroots groups and other users of Khirkee Village, New Delhi. 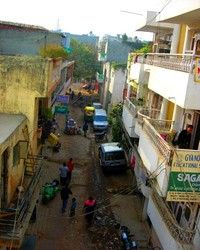 ANNOUNCING THE NEXT URBAN TYPHOON!

In partnership with Khoj.

‘KHOJ International Artists’ Association’ is an artist led alternative space for experimentation and international exchange based in India.

Part of the global *Triangle Arts Trust <http://trianglearts.org>*, KHOJ sees its role as an incubator for art and ideas, artistic exchange and dialogue in the visual arts.

Ground level support for the workshop in New Delhi is being provided by Ford Foundation and the Royal Norwegian Embassy.

The Urban Typhoon workshop invites artists, architects, activists and     academics from all over the world to ideate with residents, grassroots groups and other users of Khirkee Village, New Delhi. The event aims at reclaiming the locality by collectively generating multiple ideas, visions and plans for its future.

During the week-long workshops all kinds of interventions and interactions will take place, stimulating debate, exchange and awareness. The workshop draws its energy and creativity from the involvement of local users, including business owners, housewives, children, teenagers, loiterers and other hoodies. It focuses on local participation and global engagement.

The workshop is documented throughout the week. The participants also produce all kinds of material, which is then uploaded on a user-generated Website. In addition, the output is translated into various installations, exhibitions, essays, festivals, architectural designs, urban plans and site-specific action, during and after the workshop. Its ultimate aim is to inform decision-makers on the aspirations and potential of Khirkee Village.

URBZ, has been conducting similar workshops in various places around the world including Shimokitazawa (Tokyo), Dharavi (Mumbai) and Galata (Istanbul).

The Urban Typhoon Khirkee (New Delhi) workshop is being organized in partnership with Khoj, a globally renowned artists collective based in that very neighbourhood. Khirkee is an ‘urban village’ in a city in fast forward mode, which may need to creatively reinvent itself if it is to preserve its identity in an increasingly alienating global context.

Khoj has operated from there for more than a decade and has initiated several projects, where artists have become urban practitioners projecting visions and revealing choices that formal actors may have overlooked.  In this partnership between Khoj and URBZ, we hope to organize an event that has a special significance to the world of urban engagement in which artists have a special role to play.