Khirkee, being an “unauthorized colony”, the authorities are not taking any responsibility regarding the water system. 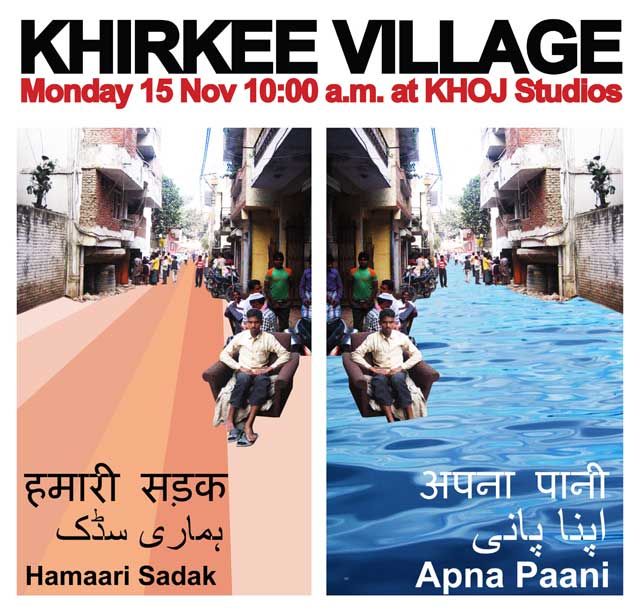 We have been spending the last few days speaking to shopkeepers, building owners and residents about the road in front of the KHOJ office. In the past 10 years the road has been redone and destroyed 4 or 5 times. We tried to understand why. It quickly became clear that this wasn’t just a technical issue. The road could never be repaired and maintained without the active support and involvement of the people living alongside it.

The road issue is also linked to the water system. The pipes under the road are completely plugged and during the rainy season used water comes back up to the surface and inundates the road. Last July-August going to the KHOJ office meant walking through sewage. The shopkeepers were particularly affected since no business could happen.

The stagnant sewage water became a breeding ground for mosquitoes. The three queens: Malaria, Chikungunya and Dengue are endemic in Khirkee. Many people told us how they had been sick for long stretches of time, including colleagues at KHOJ.

Historically, the water problem emerged with water pumps, which suddenly meant that more water was getting consumed and that evacuation had to be organized more systematically. Masterji, an elderly resident who knows Khirkee since pre-independence days said that before water pipes and pumps were installed no drainage system was needed.

Khirkee, being an “unauthorized colony”, the authorities are not taking any responsibility regarding the water system. Whatever exists now has been built by groups of residents (it is a user-generated water-system). The water comes from the municipality but the pipes have been installed locally. Since then many new 6 to 7 stories-high buildings have emerged along the road, substantially increasing water consumption. The existing sewage pipes which were laid down fifteen years ago have become too small to take the load produced by the new high-rises. To add to the problem all kinds of plastic waste and rubble that is thrown on the streets ends its journey in the pipes,  plugs it.

Since the pipes are below the ground they are much harder to clean. To clean them someone must go below the road through a manhole and manually remove some of the junk plugging the pipe. The rest is pumped out by a machine.

To make matters worse, according to some of the residents, trying to unplug the blocks in the sewage with high pressure pumps may cause pipes to burst.

There are several suggestions being made which we will factor in our research and action: to retrace the water flows through older well systems and use them to absorb rain and storm waters, thus easing the pressure on the sewage and other systems; having regular clean ups of the sewage, plugging the points of entry of dry and rough garbage so that systems do not get clogged, so on and so forth.

We began by building on Pooja Sood’s suggestion of naming the road – Hamaari Sadak which means Our Road, and inviting the neighbourhood to discuss suggestions and proposals during the workshop on Monday.

One thing is certain, the road and water issues can only be addressed by a coming together of the residents.