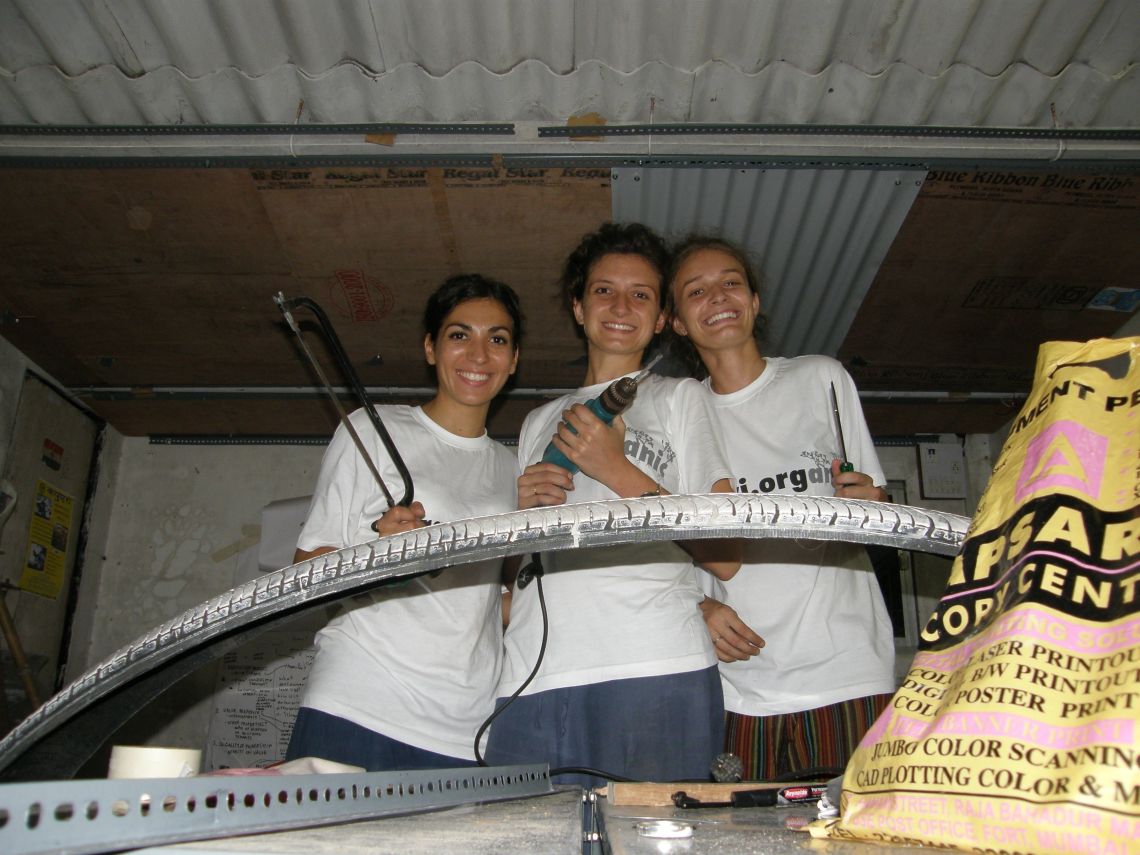 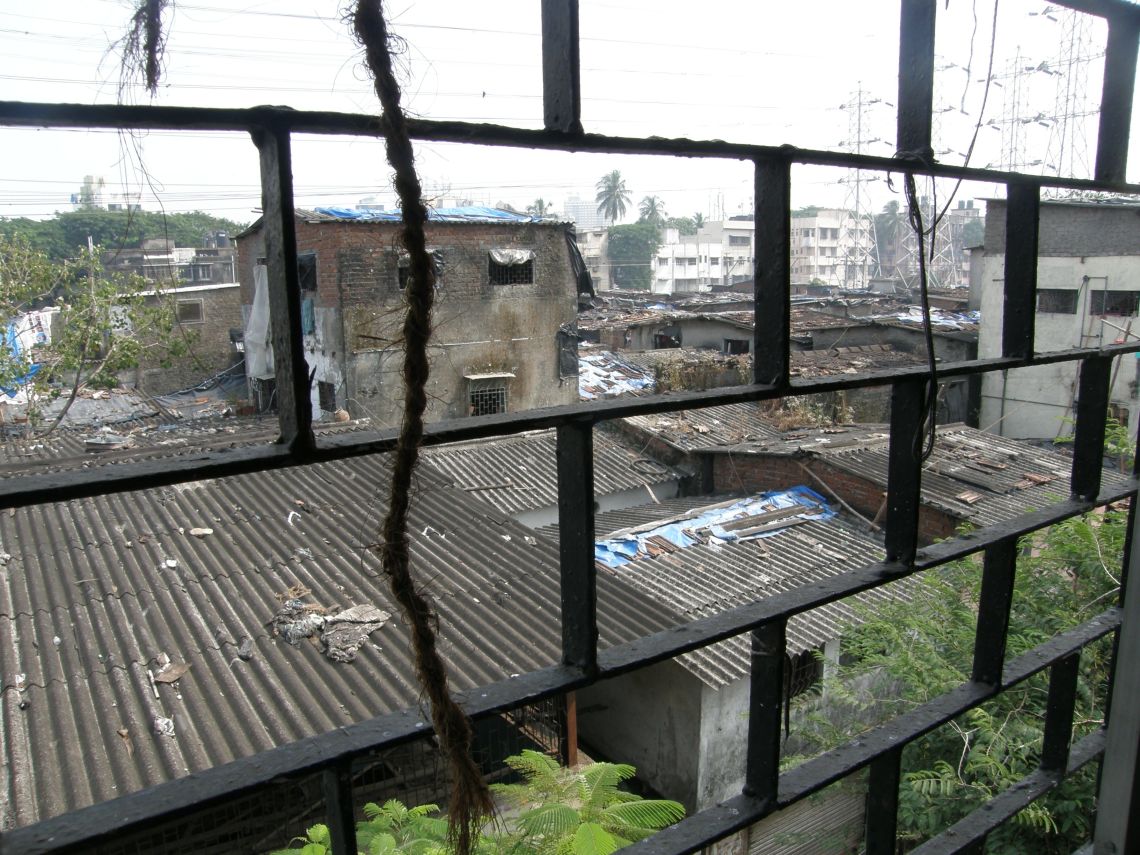 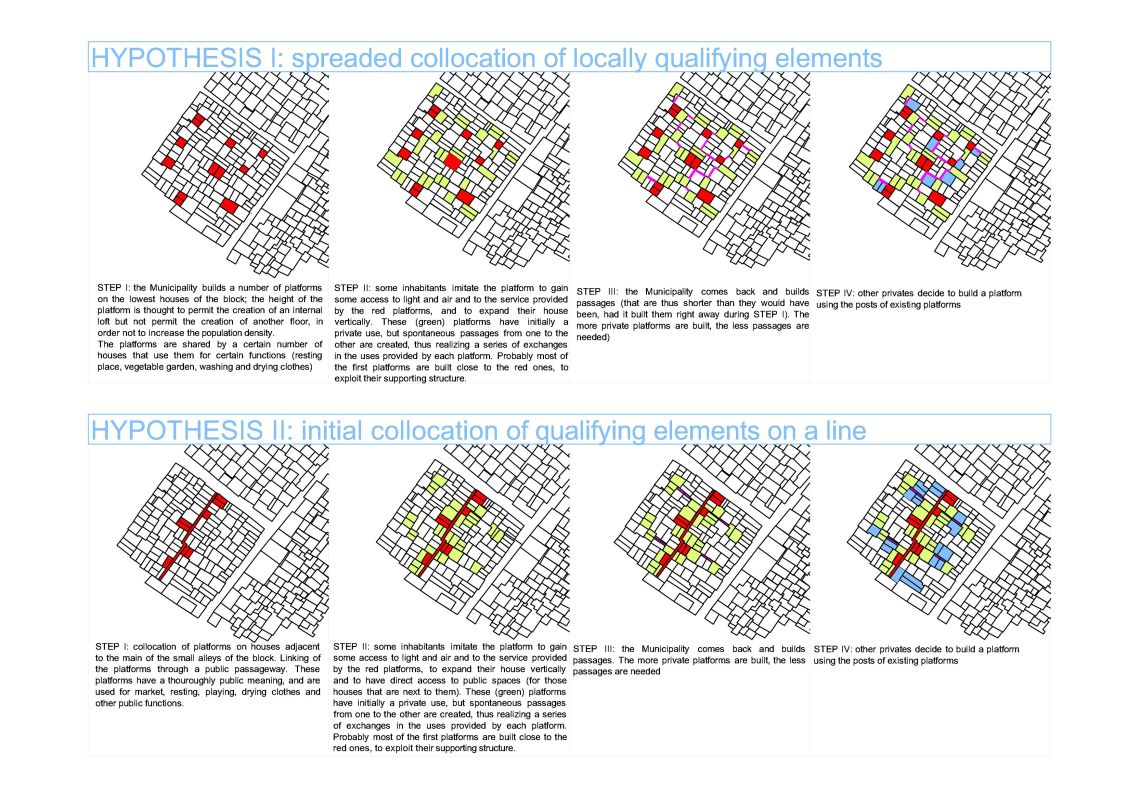 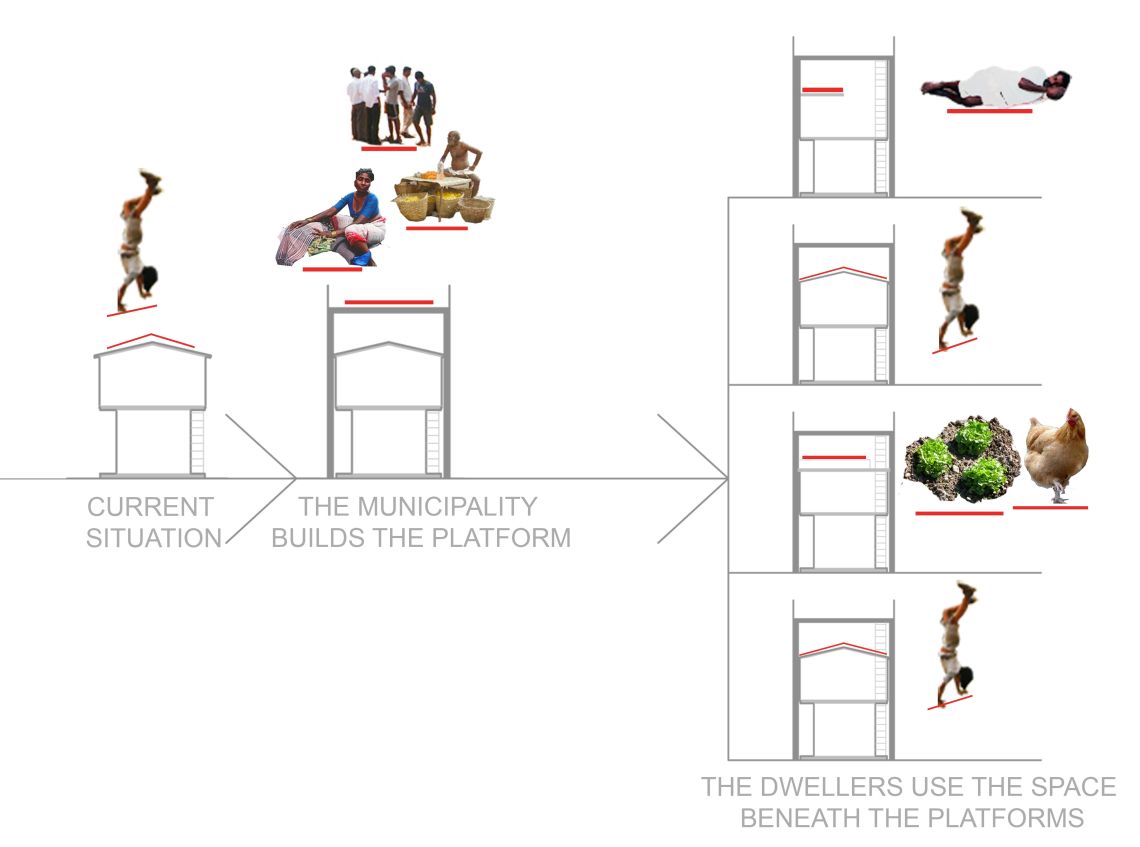 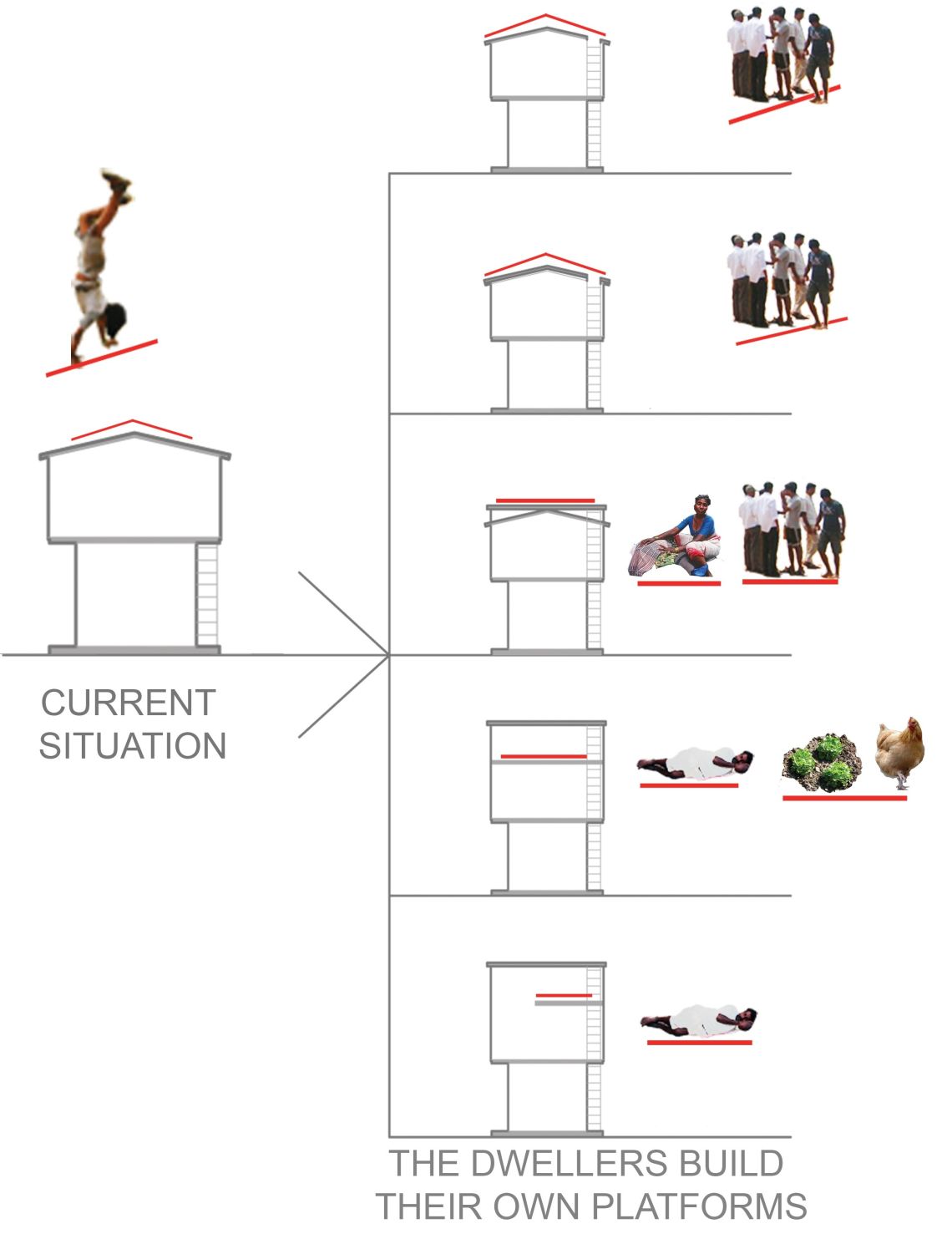 We are writing our second blogpost after having come back from Dharavi and started to work on our final thesis project in architecture at the Polytechnic in Turin, Italy.

While in Dharavi, we worked on a project for improving the URBZ office’s roof (see our other post, “A roof in Dharavi”). It was a fun project, and we got to explore Dharavi looking for low-cost materials and building techniques.

What’s more, it got us to look closely at roofs in Dharavi – especially in New Transit Camp – and the role they play in the district’s daily life. Most roofs are made of asbestos sheets, and they slope on one or two sides, probably to make the monsoon rains go away faster, but very gently, in order not to waste too much space vertically. Inside, there is nothing between the asbestos and the room, making it dangerous for people’s health because of the particles that surely spread into the air they breathe. That is the main issue we tried to solve in the office  when we put up (a part of) a false ceiling made of pallet racks and plywood.

But the most interesting thing we found out while looking at those roofs is something related to the actual life-rhythms of the district. We found that they are more than simple coverings to protect the house from rain and sun: they are surfaces to walk, play, sleep and work on.

One thing that immediately catches the eye is that the “roof-dwellers” are male, usually kids or youth . That is easily explainable: the access to roofs is not so easy, and it usually happens through small windows from which grill-boxes have been torn out or simply bent.  This assures that only very agile individuals can go there: namely boys – while girls are probably  prevented by social factors. What’s more, the surface is neither safe nor suited for walking on.

The answer to the first question is in the pictures we showed. We saw somebody flying kites, somebody chatting, somebody charging his phone through the wires that run in bundles over the houses, somebody storing various objects and materials, somebody eating, somebody sleeping. But the two questions are actually intertwined. Because the reason they go there is dependant on what they can do there, and vice versa.

In the chaotic, overcrowded and over dynamic environment of Dharavi, space is the main resource. To cite one data –though as all data it is actually pretty meaningless in such a complex pattern – in Dharavi there is a mean ratio of 0,2 square meters of open space /person, while the international standard is of 12. This can give an idea of how cramped everything is, especially if we consider that most of the daily routine is spent in the street, or in the interstitial spaces between the houses. Every inch of space has its use and is exploited to its fullest.

It is obvious, then, that the roofs are experienced as a refuge space by those who can profit from them; for instance, since space to fly kites is very scarce on street level, and cars make it even dangerous, children prefer to climb onto the roofs where they have a certain quantity of open space all to themselves.

Starting from these considerations, we began to put down the main points of a project that we are now developing for our thesis: implementing the quantity of open space by building some sort of walkable-on platforms on the roofs.

To do this in a realistic way, we first had to fully understand a number of issues.

First of all, who is to build these platforms? The inhabitant? The Municipality? We decided to imagine  involving both those actors, thinking of the process in the way that Urbz usually does: somebody thinks of something and starts it, then if it’s good and it works, it is most probable that others will follow his example and that “something” will spread out, more or less quickly. So, we thought, imagining a scenario in which the Municipality decides not to go through with the DRP, it would build the first platforms over a number of houses and then look as other dwellers build them for themselves, over their own houses.

This decided, there was the problem of incentive to consider. Probably just having an additional surface would be enough for dwellers to want to have those platforms, but a further prod would make them even more willing. So it could be that the Municipality lifts the prohibition to expand houses just for those who wish to build the platforms. In this way, people would have the permission to expand vertically (limiting the expansion to maybe 1,6 meters so that additional space can be used for a number of functions but not for renting out to another family; in this way density doesn’t’ grow).

We then came up with two alternative schemes, which we present here.

In the first hypothesis, the initial platforms built by the Municipality are a kind of neighborhood space, as they serve a certain amount of houses for a certain amount of semi-private purposes, like manufacturing, hanging clothes, etc, while the actual owner of the house has the advantage that his house received an additional loft space beneath the platform. As the building of the platforms spreads, more and more houses have them and the ratio of open space grows. At his point, it can go either way: if the platforms have assumed a private use, meaning that each household tends to use their own and not go onto the others, the process can stop here. If, on the other hand (and we think it would happen this way), the platforms are used more “publicly”, as walkways, as selling points for hawkers, as markets, then the Municipality would decide to come back and install safe passageways between one and the other (Step III).

In the other hypothesis, the platforms are immediately seen as more “public”, as a public street on which hawkers can install their stands and manufacturing can find more space, and so on.

We then tried to imagine these platforms as a physical element in their different, possible conformations.

Of course, we are aware that given the permission to expand vertically, a lot of people wouldn’t miss the opportunity to build an additional floor beneath the platform in order to rent it out and have an income. Since our goal is simply to increase open space per capita, even if let’s say one more floor every two houses is built, the ratio still changes in our favor.

Of course, we are aware that our project would change the dynamics of the use of roofs: roofs are currently used as a refuge from the hyperactive streescape of Dharavi. Our project would strip them of this characteristic, as it most probably would happen that all the activities that are now cramped on street level would expand on the platforms and take them over. On one side, then, our project implies the loss of one fascinating aspect of Dharavi. On the other side, though, it also gives people the opportunity to shape that additional space themselves. In this way they are given the chance to use it as a refuge space if they want so, or to exploit it more thoroughly for economical reasons.

Briefly, we think this project might have a point of strenght in just that: providing dwellers with a sort of virgin space (two virgin spaces, if we count the loft) that they can adapt to their most urgent needs, while as things are now roofs are used in a certain way because it is the only way they can be used.

We are of course hoping that this post will receive a lot of critiques and comments, so that we can profit from the discussion and make this project better and more realistic. Till next time,

Valeria, Serena, Daniela are master students in architecture at the Polytechnic in Turin, Italy. 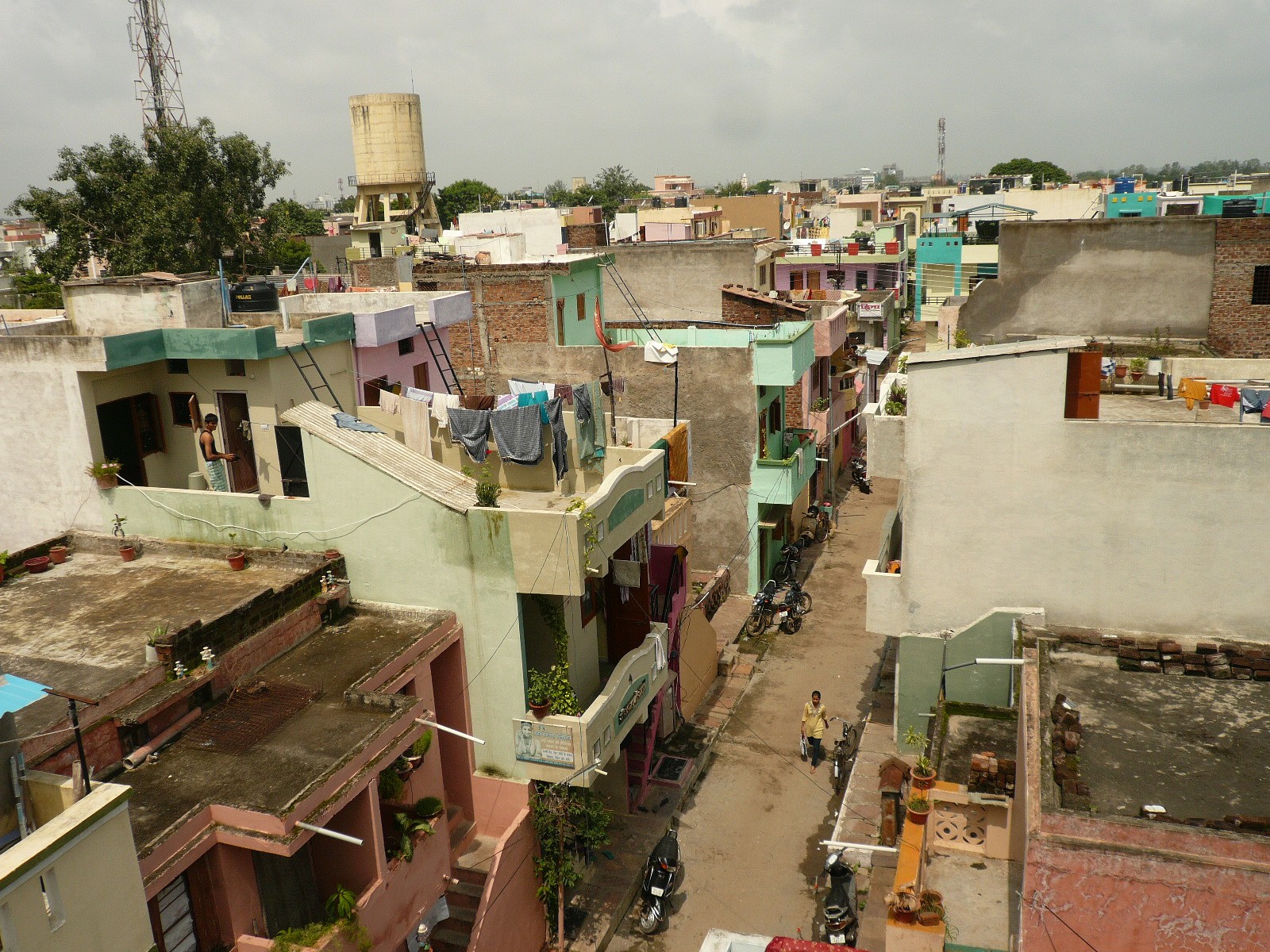