Participation can happen anywhere, when people feel the need to get involved with their social and physical environment. 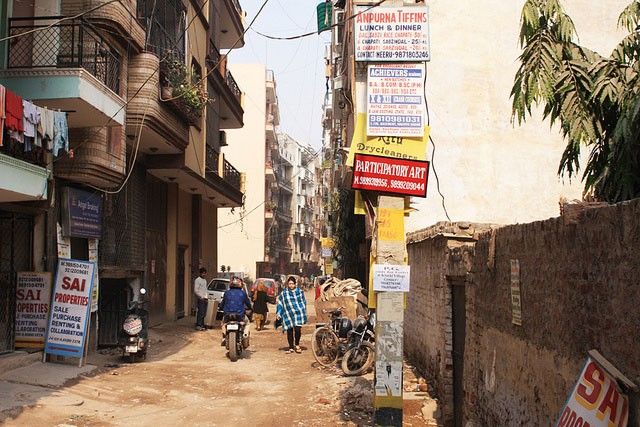 1. The Urban Typhoon workshop was born in Shimokitazawa, Tokyo in 2006 through discussions with activists and academics who were looking for new forms of advocacy and participation based on local knowledge and cultural practices. The neighbourhood of Shimokitazawa was, and still is, threatened by the construction of a large speedway cutting across its dense urban fabric. Shimokitazawa, Koliwada-Dharavi and Khirkee are what we would refer to as 1) user-generated neighbourhoods, and 2) neighbourhoods in formation.

2. User-generated neighbourhoods are places where participatory development is already alive, even if un-self-consciously. The users are the residents, the shopkeepers, artisans, manufacturers and even visitors and other travelers. They all shape the neighbourhood in small ways, through their “practices of everyday life” and collectively make it alive. User-generated neighbourhoods are not a collection of architectural objects. Over time they develop their own character (or “spirit”) and respond to users in particular ways. They are often complex, contested, and threatened. Their users are typically deeply attached to them for personal reasons and accused of being dysfunctional and backward. We see user-generated neighbourhoods as ancient and futuristic at the same time. They ring a special cord with net-generation architectivists, urbanologists and other hackers and artists who see them as learning grounds for new social practices.

4. Participation can happen anywhere, when people feel the need to get involved with their social and physical environment. It is never as high as when all residents are simultaneously affected by a disaster that they must address collectively. More often than not, these disasters are man-made. Khirkee seems to be in permanent crisis, with roads being systematically flooded or destroyed and sewage spilling along the streets. Many initiatives have been taken by the residents and local organizations such asKHOJ. Many have failed, few have succeeded. Rather than proposing new participatory methods or “solutions”, we must understand what systems of participation already exist in Khirkee and how they can be used in the most effective ways.

5. Urban Typhoon workshops make sense only when they can be organized in partnership with a local group. In this case, KHOJ, which has been present and active in Khirkee for 12 years invited URBZ to organize a workshop. URBZ and KHOJ have been working together to prepare the workshop. KHOJ is bringing its experience of the neighbourhood, its local network and opens the possibility of continuing some of the projects that will be started during the workshop afterward. URBZ is bringing its experience in organizing participatory workshops, its global network and the enthusiasm of its team.

6. Participants come from Khirkee, other parts of Delhi, other cities and other countries. It is more difficult to get participants from Khirkee than from abroad. Locally, people are typically disillusioned, skeptical or busy. Registered participants on the other hand are often extremely motivated and full of goodwill. One of the main challenge for participants coming from other places will be to find respectful and constructive ways to engage with people in Khirkee. The workshop doesn’t offer a formula for participation. The equation with “the community” has to be invented by all participants individually and collectively. This is where creativity is most needed.

7. The “community” may not exist before we create it in some way and it is often invoked most concretely only in a collective process. Khirkee has many traditional communities, which may themselves be internally divided. The attempt of the  workshop is to bring together people from different parts of the neighbourhood and beyond to help the emergence of a new network of people through the process of working and brainstorming together. Such an event has to be understood as a creative one, which helps transform perspectives and brings shifts in perception and action. Community arts initiatives have often been trivialised by both, activists and artists. We feel that its is only through a process that evokes and works with the idea of the creative and the collective that major strides can be taken in both realms. The first as well as the final challenge is often simply about discovering a shared sense of purpose.